This page is for the album. For the song of the same name, see Mink Car (Song).

Mink Car is They Might Be Giants' eighth studio album, released in 2001 on the Restless label.

Mink Car was recorded between 1999 and 2001 in numerous studios and featured many guest artists and producers.

Many of the album's tracks were pre-released by the band via TMBG Unlimited in either their demo or final forms. "Older" and "She Thinks She's Edith Head", had been released in other forms on Long Tall Weekend.

Depending on the country of release, Mink Car's tracklisting varied widely. Several additional songs, "Boss Of Me", "Your Mom's Alright", "MacGyver", and "Robot Parade (Adult Version)" were tacked on as bonus tracks. The European CD's version of "Older" is missing one rauschpfeife note.

Man, It's So Loud In Here was the only domestic single from the album, but was not widely circulated. Promotional releases of "Another First Kiss" and "Bangs" were also issued, and "Working Undercover For The Man" had been released on its own extended play the previous year.

The album's cover and media art were designed by The Chopping Block, which also did artwork for the band's follow-up, No!. More information on the design process for the album's artwork can be found here.

Mink Car is TMBG's only album to have ever fallen temporarily out of print, due to what Flansburgh referred to as "the almost instant collapse of Restless Records after the events of 9/11."[1]

In 2021, Flansburgh reflected on the album, in response to a question about performing some of those songs in shows: "Doing Mink Car [songs live] is kind of for us. It was a record we spent a lot of time on and collaborated with the dearly departed Adam Schlesinger [who passed away in 2020]. I think it didn’t really get a public hearing because of events beyond anyone's control. It's something we're proud of."[2]

The album was released on vinyl for the first time in February 2022 and limited to 3000 copies, with artwork "upgraded for the times by the uber-talented Elizabeth Connor and TS Rogers."[3] The vinyl release was accompanied by a digital rerelease that featured the four extra tracks originally found on the album's Japanese CD release. As a result, the songs "Boss Of Me," "Your Mom's Alright" and "McGyver" were made available for the first time on streaming and digital stores. 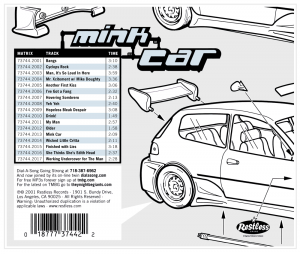 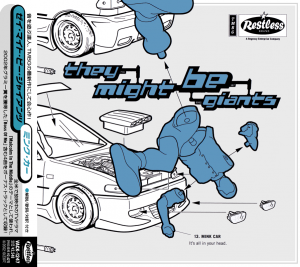