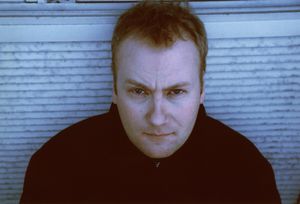 Mike Doughty is a solo artist and was the former frontman of the group Soul Coughing. He performs vocals on the They Might Be Giants songs "Mr. Xcitement" and "Your Mom's Alright", from the Mink Car era, and he has appeared at a few TMBG shows to provide vocals for the latter. Doughty also contributed vocals for the song "Dawn Divine" that was expected to be on TMBG's 2013 album Nanobots, but it didn't make the final cut.

He also contributed songs to the They Might Be Giants Vs. McSweeney's disc in 2001, and to the Future Soundtrack For America in 2004 (which was organized by John Flansburgh).

In 2020, Doughty expressed his admiration for Flood on its thirtieth anniversary.[1]