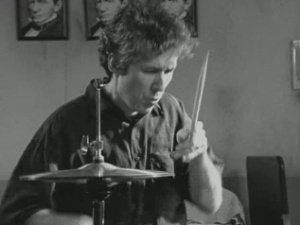 Dan Hickey, as seen in the "Doctor Worm" video.

Dan Hickey (born May 30, 1957) was They Might Be Giants' drummer from 1997 to 2003. He appeared in the videos for "Boss Of Me" and "Doctor Worm", even though he did not play on the latter song. As TMBG's live drummer through those years, he can be heard on several of the live performances on Severe Tire Damage, and he is the main drummer on Mink Car and No!. He also appeared on John Linnell's solo album State Songs, playing drums on "The Songs Of The 50 States," "West Virginia" and "Michigan."

His talents have been specifically showcased in the following songs: