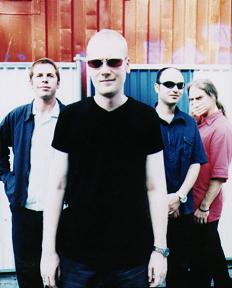 Soul Coughing was a New York City-based alternative rock band. The lead singer was Mike Doughty (known as M. Doughty in his earlier career). Yuval Gabay provided drums and vocals. Soul Coughing toured with TMBG several times. They also recorded the June 1996 CD to John Flansburgh's Hello CD Of The Month Club. Flansburgh has had praise for the band, saying, "those guys were the best".[1]

Soul Coughing formed in 1992. Their biggest hit was in 1998 with "Circles" from their album El Oso, which made #8 on the Alternative Music charts. The group disbanded in May 2000.

Doughty provided vocals for the TMBG songs "Your Mom's Alright" and "Mr. Xcitement," and Gabay played drums on "Token Back To Brooklyn" and some Mono Puff tracks.