This page is for the album. For the song of the same name, see No! (Song).

No! is They Might Be Giants' ninth studio album, released in 2002 on the Idlewild and Rounder Records labels. It was the band's first children's album, and the first released on the Idlewild label. In 2012, for its tenth anniversary, the album was digitally reissued with seven bonus tracks. 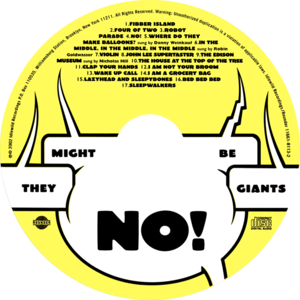 No! was the band's first foray into the children's music scene. While a lot (but certainly not all) of children's music has a low production value, the band wanted to create an album that was very rich-sounding and didn't belittle its listeners. The band has often said that No! was a project that was not explicitly aimed toward children, but designed to be more kid-friendly than past works. Of the lighter nature of the album, John Linnell noted, "Usually on a TMBG record, there's at least one song that invokes death. Instead of that, there's a lot of songs about going to sleep". The album was started as a side project during their work on Malcolm In The Middle and other side jobs that kept the band in the studio frequently. After moving around different labels for a few years, they eventually released it as the first album on their own imprint, Idlewild. John and John decided to name the album No!, despite having been advised to avoid negative words.

The CD is also enhanced with interactive Flash animations for most songs, animated by The Chopping Block and viewable on most computers. This CD was the first multimedia album released by the band that contained both music and video content.

A chart showing the historical performance of No! on the Billboard & CMJ Charts.

Children's music proved to be a successful venture for the band, as the album debuted at the #1 spot on the Billboard Top Kid Audio chart for the week of June 29th, 2002. It was the band's first and only album to hit the top spot on a Billboard chart. No! spent 11 weeks total on the chart, before it fell off. In addition, it spent 5 weeks on the Billboard Top Internet Albums chart, where it peaked at the #4 spot. According to Nielsen SoundScan, it had sold 144,000 copies in the United States as of February 2008.[1]

The album's success on the children's music charts led to the release of the Bed, Bed, Bed and Kids Go! children's books through Simon & Schuster, and three further children's efforts through the Disney Records label. In 2015, the band released a proper followup to No! with the album Why? 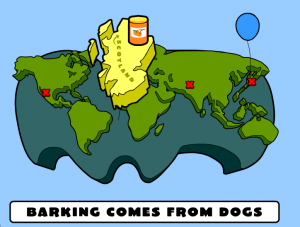 One of The Chopping Block's animations, for the song "Where Do They Make Balloons?"

No! includes the rock songs "No!" and "John Lee Supertaster", the spooky "The Edison Museum", the somewhat standard kids' song "Where Do They Make Balloons?", the public service announcement "In The Middle, In The Middle, In The Middle", the robot-narrated "Robot Parade", and a vocal instrumental "Wake Up Call" where the only words are "Bo", "Baw", and "Do". At the end are some songs related to sleeping: "Lazyhead And Sleepybones", the rather boisterous "Bed Bed Bed", and finally the gentle rocker "Sleepwalkers".

"I Am Not Your Broom", "Wake Up Call", and "I Am A Grocery Bag" are all similar to the original demos recorded on Dial-A-Song in the late 1990s through early 2000s, with "I Am Not Your Broom" being played live as early as 1996, and later recorded as a video dialogue between Linnell and a broom posted on tmbg.com. "Violin" was a common encore performance at live shows around the release of No!, almost always culminating with a band-directed "The Wave" by the audience during the "Woooah!" at the end of the song. 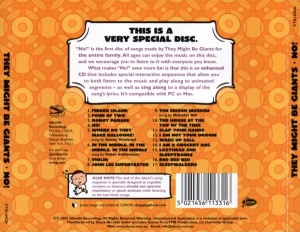 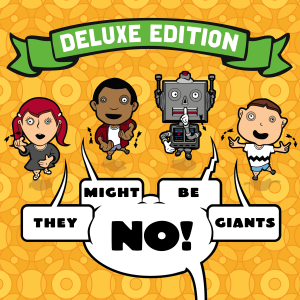 Artwork for the "Deluxe" Edition

On June 26, 2012, ten years after the album's initial release, it was reissued digitally through iTunes, Amazon, and theymightbegiants.com. The digital "deluxe" version included seven bonus tracks: six kid-friendly live tracks from the Almanac collection, and a new studio version of "Alphabet Of Nations", featuring the bridge used in live performances.