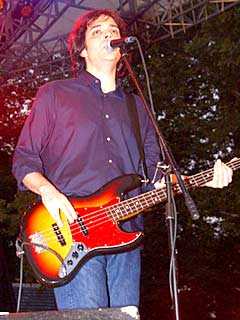 Adam Schlesinger was a rock musician, as well as a producer and engineer of music, who worked with They Might Be Giants. Schlesinger died on April 1st 2020 from complications caused by COVID-19, aged 52.

Schlesinger produced three tracks on Mink Car: "Man, It's So Loud In Here", for which he also did "a lot of the programming"; "Another First Kiss", where you can hear his "additional keyboards"; and "Yeh Yeh", on which he played synth bass.

Adam can be seen in the studio with the band in Gigantic (A Tale Of Two Johns) in a quick scene when They are in the studio listening to a demo version of "Man, It's So Loud In Here".

Adam was the bassist of the rock band Fountains of Wayne, which he founded in 1995 with guitarist Chris Collingwood. He also took up other assorted tasks and instruments, such as guitar and keyboard playing, as well as producing, engineering, mixing, and singing. The band was fairly similar to TMBG musically, writing catchy songs about odd subjects (though they were nowhere near as surreal as TMBG.) Plus, TMBG's own Danny Weinkauf played bass on their debut album.

Adam was also one-third of the band Ivy, with Dominique Durand and Andy Chase. Ivy opened for TMBG on several dates in 1995. Marty Beller played drums on two tracks from their 2002 album Guestroom.