The Spine is They Might Be Giants' tenth studio album, released in 2004 on the Idlewild and Zoë labels. 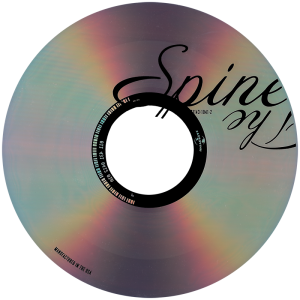 A chart showing the performance of The Spine on the Billboard and CMJ charts.

The Spine was TMBG's first full-length adult-oriented album since 2001's Mink Car, and followed the 2002 children's album No!. It was produced by longtime TMBG producer Pat Dillett. The cover features art created by Zohar Lazar and packaging designed by Melissa Jun, using Jonathan Hoefler's "Cyclone" font on the cover.

Some tracks from the album had previously been on Dial-A-Song or were released online as demos, such as "Au Contraire", "Stalk Of Wheat", "I Can't Hide From My Mind", "Museum Of Idiots", "Wearing A Raincoat", and "Damn Good Times". Some had been played live several years before, including "Thunderbird" and "Museum Of Idiots", which had become fan favorites. "Au Contraire" and "Memo To Human Resources" had previously been included on the preceding Indestructible Object EP. However, a few tracks were completely unheard by fans until the album's release.

The iTunes release of the album also contained an exclusive track, "Renew My Subscription", which had been cut from the final album tracklisting. An unfinished demo of the song had previously been made available on tmbg.com the year before.