Cast Your Pod To The Wind 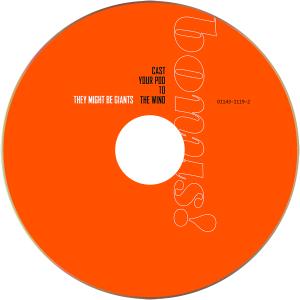 The bonus CD that came with original copies of The Else. 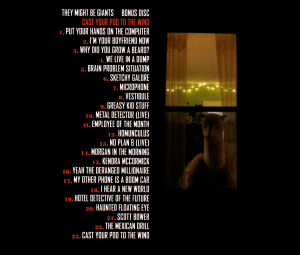 Track listing that came with original copies of The Else in Australia.

This page is for the album. For the song of the same name, see Cast Your Pod To The Wind (Song).

Cast Your Pod to the Wind is a 23-track compilation that was originally included with The Else's CD release first pressing as a bonus disc. In July 2009, it was made available for purchase on the iTunes Store. The compilation consists of new or reworked TMBG material previously unreleased on CD.

The compilation contains 21 songs that were previously released through the They Might Be Giants Podcast, including the title track, "Cast Your Pod To The Wind." "Brain Problem Situation" had not been released (or even mentioned) until this disc's release, and "No Plan B" had only been performed live a few times and recorded for a radio show. In addition, "I'm Your Boyfriend Now" and "We Live In A Dump" were entirely re-recorded for the disc, while many others were remixed, remastered, and partially re-recorded to optimize the songs' new-found high fidelity.