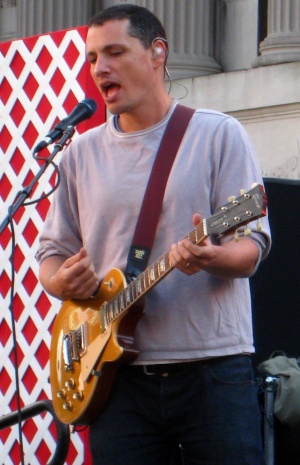 Dan Miller (born October 3, 1967) has been TMBG's lead guitarist since the late 1990s, and previously performed with the bands Edith O and Lincoln. Miller left Lincoln following an argument in a hotel room in Winston-Salem, N.C. in mid-1998. He hitchhiked back home and shortly thereafter, John Flansburgh called to offer him a spot as lead guitarist for TMBG's fall 1998 tour in support of Severe Tire Damage.[1]

He has also toured with John Flansburgh as Mono Puff's guitarist in the late 90s, and played with John Linnell And The Statesmen during Linnell's State Songs tour.

Miller is known to sing backup on live performances of tracks such as "Doctor Worm," "Experimental Film," "Yeh Yeh," "Fingertips," and several of the Venue Songs. He also plays keyboard on a few of the songs where Linnell is playing accordion, such as "Doctor Worm", "The Darlings Of Lumberland", "Let's Get This Over With", and "Alphabet Of Nations." Miller co-wrote the song "Infinity" with his former college roommate Robert Sharenow on Here Come The 123s. It is his only lead vocal contribution on a TMBG studio album to date.

In addition to playing with TMBG, Dan and Marty Beller have their own musical production firm called MartyDan Industries. Working together, the duo has created music for film, TV, and commercials. Dan is also credited on Jonathan Coulton's album Artificial Heart.

Miller is originally from Rochester, NY. On June 21, 2008[2], Miller was married to Annette Berry, a graphic artist and art director in Manhattan, who is credited with design on Long Tall Weekend. They have a daughter, Piper, born in the fall of 2010. 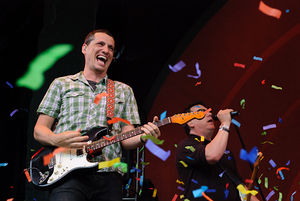