Working Undercover For The Man (EP) 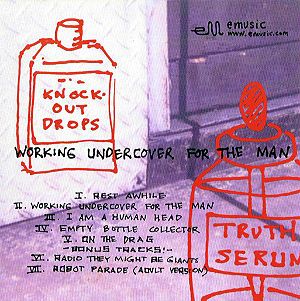 Back cover artwork for the physical CD

Working Undercover for the Man is an MP3 extended play released in 2000, offered through eMusic. In addition to a CD promo, 10,000 official copies were pressed on CD.

The artwork for Working Undercover for the Man was illustrated by John Flansburgh. Like many of their contemporary releases, the EP was initially issued exclusively through eMusic. The majority of CD copies were shipped out free of charge as a bonus to US customers who had purchased the MP3s. For a short time, the CD was also available on tmbg.com. Since other online music stores have become more prominent, MP3 copies have also become available through services like iTunes.

A press release on theymightbegiants.com in early 2000 mentioned a song called "It's Not a Game" that was originally slated to be on the EP, possibly instead of "On The Drag". The song is not known to have ever been released, at least by that name.

Scheduled for a May 16th release, this downloadable album will include all new songs; "Working Undercover for the Man", "Empty Bottle Collector", "Human Head", "It's Not a Game", "Rest Awhile" and a version of the "Radio They Might Be Giants" theme, made famous at the wiredplanet.com Radio They Might Be Giants site, which coincidentally will be updated with select live songs from one of our best live Fall shows, by Friday, May 5th.

The EP was released prior to Mink Car, which included the title track, "Working Undercover For The Man".