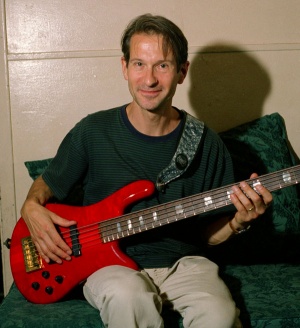 Graham Maby is a long-time bassist for Joe Jackson that joined They Might Be Giants in 1994. He played on John Henry, Why Does The Sun Shine (EP), Back To Skull, Factory Showroom, Severe Tire Damage and Working Undercover For The Man (EP). In 1997, he was "scooped away" by Natalie Merchant. His last show with TMBG was at the Chameleon Club in Lancaster, PA, which was supposedly the site of his first gig with the band. During the last show, he got his wish from the "Make a Rock Wish" foundation: the entire crowd shouted "Graham! Graham! Graham!" during "The Guitar".