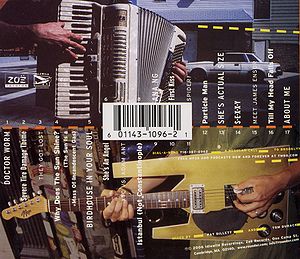 2006 reissue back cover (featuring They Might Be Giants Podcast plug)

Severe Tire Damage is They Might Be Giants' first commercially-released live album, and their second release on the Restless label after departing from Elektra.

Out of the 24 tracks on the album, 21 are live tracks, taken from various recordings. The versions of "Ana Ng", "Birdhouse In Your Soul" and "She's An Angel" on this album were previously featured on Live!! New York City 10/14/94, although there are small mixing and editing differences, including an overdubbed bridge in "Ana Ng". Also contained on the album were a series of live songs centered around The Planet Of The Apes. The tracks were taken from fan-submitted bootlegs of the shows they were played at, as the band hadn't originally planned to immortalize the improvised songs. These tracks were originally "hidden tracks", as the back of the CD doesn't list them and they play after 2:20 minutes of silence at the end of the track "About Me".

A stripped-down version, simply titled Live, was released in 1999. It features only 10 of this album's 24 tracks.