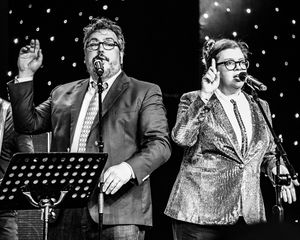 Robin Goldwasser on stage with John Flansburgh on the 2019 JoCo Cruise, performing the "Spider-Man" theme 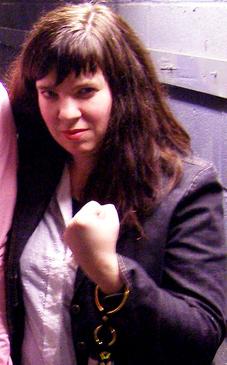 Goldwasser with The Last Car 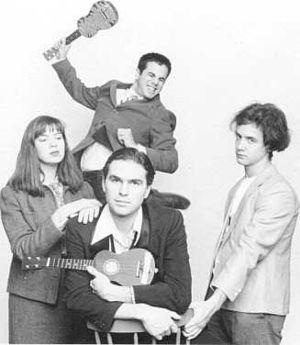 Goldwasser with Uke Til U Puke

Robin "Goldie" Goldwasser (born August 14, 1966), also known as Sister Puff in her Mono Puff collaborations, is John Flansburgh's wife. She co-wrote the musical People Are Wrong! with Julia Greenberg. She has a character in the play, as does the producer — Flans.

Goldwasser sings on the occasional TMBG and Mono Puff track and has toured with both bands on several occasions. According to the Direct From Brooklyn commentary, she appears as one of the guitarists in the video for "The Guitar" and is in the video for Mono Puff's "The Devil Went Down To Newport". With Julia Greenberg, Goldwasser wrote the song "It Never Fails", which was featured on Podcast 5A and sung by Flansburgh. She is a former member of Spondee and Flat Old World, which both had releases on the Hello Recording Club. More recently, she has joined Chris Anderson and Amy Miles to create the band The Last Car. She has also occasionally performed as part of the ongoing Loser's Lounge tribute act.

Goldwasser is a talented knitter and crafter and is the founder of the Deeply Felt Puppet Theatre. In recent years, she has created the The Puppet Johns and The Avatars of They, for whom she also administers a Twitter account. She painted wooden balls for the album art of 2001 Radio Sampler No. 1. For Here Come The 123s, she created the needle-felted number-shaped puppets for Hine Mizushima's video for "The Secret Life Of Six" and the puppets for David Cowles' video for "Number Two."

Outside of her work with TMBG and Mono Puff, Goldwasser was (briefly) the cellist for the ukulele duo "Uke Til U Puke"[1], consisting of John Derevlany and Robert Moritz. She portrayed the singing voice of Sarah Silverman's vagina in the 2005 standup comedy film Sarah Silverman: Jesus Is Magic. She was also the singing voice for Abraxxia in the theme song for Stephen Colbert's Alpha Squad 7: The New Tek Jansen Adventures. She is the announcer for all three of John Hodgman's audiobooks, and both she and Flans are thanked in The Areas of My Expertise.