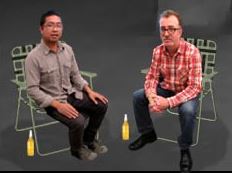 Maxwell (right) with Phil Hernandez of The Elegant Too

Chris Maxwell is one half of the duo, Elegant Too. Maxwell is a guitarist from Little Rock, Arkansas, and played in various bands throughout high school. After graduating from high school in the early 80s, Chris fronted a band called Jubilee Dive. In the mid-80s the members of Jubilee Dive went their various ways, and Chris formed a band called The Gunbunnies, who put out a sole 1990 album, Paw Paw Patch. After the demise of that band, Maxwell joined Erik Sanko to form Skeleton Key, who toured for TMBG in 1995, but he left the band a few years later.

In 1998, he and Phil Hernandez started playing songs as the Elegant Too, and the duo have come to find success in remixing and producing various music projects.