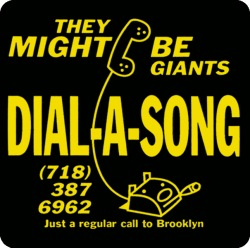 A promotional sticker for Dial-A-Song, illustrated by J. Otto Seibold

The following is a (likely incomplete) list of songs featured on Dial-A-Song during its original run from 1983 to 2006:

These are songs that were not re-recorded after Dial-A-Song, or were otherwise later changed significantly (with music and/or lyrics completely replaced). Some of these recordings received CD or MP3 releases eventually through Then: The Earlier Years, TMBG Unlimited or the They Might Be Giants Podcast.

These were (typically) early versions of songs that later became studio tracks.

Full recordings of songs were occasionally put on Dial-A-Song around or after their official release.