Then: The Earlier Years

From This Might Be A Wiki
(Redirected from Then)

Then: The Earlier Years is a two-disc compilation by They Might Be Giants, gathering a large portion of their pre-Elektra material.

Then: The Earlier Years combines the band's first two albums (They Might Be Giants and Lincoln) with the 1991 B-side/remix collection Miscellaneous T, with two tracks omitted overall—"(She Was A) Hotel Detective (Single Mix)" and the original album mix of "Don't Let's Start" (the album mix and single mix of these songs, respectively, do appear on the compilation). There were an additional 19 bonus tracks, many of which had not been officially released previously. 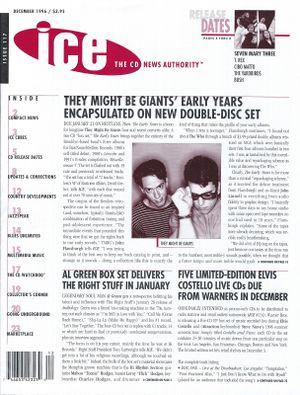 ICE Magazine December 1996 issue with Then article on cover

John Flansburgh explained the release in a 1996 interview for ICE Magazine:

(and, somehow, typically Giants-like) combination of fortuitous timing and post-adolescent experience. "the immediate events that preceded this thing were that we got the rights back to our early records," TMBG's John Flansburgh tells ICE. "I was trying to think of the best way to keep our back catalog in print, and-strange as it sounds- doing a collection like this is exactly the kind of thing that raises the profile of your early albums.

"When I was a teenager," Flansburgh continues, "I found out about the Who through a bunch of $3.99-priced double albums reissued on MCA, which were basically the first four albums bundled in two sets. I was as tantalized by this incredible value and repackaging scheme as I was at discovering the Who."

Clearly, The Early Years is far more than a cynical "repackaging scheme," as it received the deluxe treatment from Flansburgh and co-Giant John Linnell in everything from audio-fidelity to graphic design. "I basically spent three days in my home studio with some open-reel tape recorders no one had used in ten years," Flansburgh explains, "Some of the tapes were already decaying, which was terrible, really heartbreaking.

"We did a bit of EQ-ing on the tapes just because our tastes at the time ran to the harshest, most treble-y sounds possible, when we thought that a faster tempo and more treble would grab people's attention, because we were so scared that no one would listen." Although TMBG tweaked the knobs a hair in the remastering process, Flansburgh offers comfort for those dyed-in-the-wool types who liked the band's first few albums just the way they were. "The new CDs will sound a bit warmer, with more 'low end,' but it's not like a total Frank Zappa-like retread, screwing up what you know about them. We just shined them up a bit. The casual listener will hardly notice a change."

As has been standard practice since their debut, the Giants were intimately involved in crafting the look and feel of the CD artwork. "The design we chose was like Neil Young's DECADE, which, I think, is the best kind of CD reissue package you can do, because it fits in with your CD collection. I think it's a little pretentious when they do these odd shaped box sets that you stick on the shelf. Ours looks like three CDs, but it's really two with a big, fat (32 page) booklet on the inside. We wrote some pretty extensive liner notes, which gave us an opportunity to tell the story of the band's early years."

For the most part, the tracks on THE EARLY YEARS are in chronological order. To that end, Miscellaneous T is "split in half," notes Flansburgh, "because half of it was actually recorded between our first two albums, and half was recorded after the second album." Only the bonus tracks, some of which appear at the end of each CD, are non-chronological, "because we couldn't fit them all onto the end of the second disc." In fact, all of the bonus tracks were recorded before 1986, making them at least as old as - if not older than - the band's Bar/None debut.