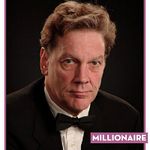 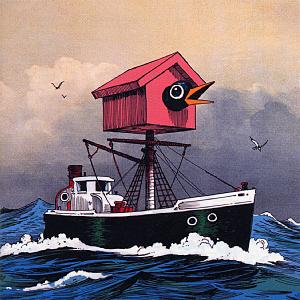 Cover for Giants Jubilee, drawn by Tony Millionaire and featuring the Drinky Crow

Tony Millionaire (born Scott Richardson) is among the most famous graphic designers ever to have worked with They Might Be Giants. He is the creator of Maakies, an alternative comic strip, and the Sock Monkey comic book series, much of which is included in a collection that has been published with an introduction by John Flansburgh. His work is notably featured on the TMBG drinking glasses. Millionaire did the illustrations for Then: The Earlier Years and related digital releases, and animated the introduction to the "coffee" segment of Gigantic, which features a character from a show created by Millionaire for Cartoon Network's Adult Swim lineup, The Drinky Crow Show. TMBG wrote and performed the theme song for the show.

I've known them actually before I started doing comics, years ago when I lived in Brooklyn. I was friends with Brian Dewan and he was roomates with John Linnell. We'd go to parties and those guys would be hanging around, and then before you knew it, boom, they were famous. So they knew my comics and they asked me to do an album cover for them, which is called Then: The Early Years.

John Flansburgh on how TMBG's collaboration with Millionare began[2]:

Tony and I were both Williamsburg residents in the 80s (or at least with him the early 90s at the latest) Back then the neighborhood's under-40 set was very small, so anyone around doing anything was kind of on everyone's radar. He drew Maakies for the NY Press so he was a bit notorious as a cool dude. Later on when he moved to LA I almost took over his apartment, but inherited his cat Pom Pom (our first in Brooklyn) instead. She was a real sweetie with a very mellow disposition. I do remember he said she was easy to manage because she "loved dry food": but our experience was she liked dry but really loved wet! She proceeded to pretty much double in size in about six months in our place. Tony recently did a cat portrait of one of our newer cats for us, and when we were talking I sent him a photo of Pom Pom to remind him of how awesome she was.

Millionaire has worked for the television program Saturday Night Live. He has illustrated the Greg Nagan book The Five-Minute Iliad and other Instant Classics and albums by Elvis Costello, and currently contributes incidental drawings for The Believer, a monthly magazine put out on Dave Eggers's McSweeney's publishing imprint. Millionaire also completed another animation project entitled God Hates Cartoons in 2002 with three other TMBG collaborators, Brian Dewan, Andy Richter, and Sam Henderson, the animator for "Flying V".