Purple Toupee was never formally released as an EP, though its tracks appeared on the Don't Let's Start LP in Europe, and two years later in the US on Miscellaneous T. An advertisement from Bar/None and Restless suggests that it was planned for a release on those labels. The Then: The Earlier Years booklet states that the EP was "recorded virtually simultaneously" with Flood. Hey, Mr. DJ was recorded at Skyline Studios, where Flood was recorded, while Lady Is A Tramp and Birds Fly were recorded at Hello Studio, John Flansburgh's home studio. 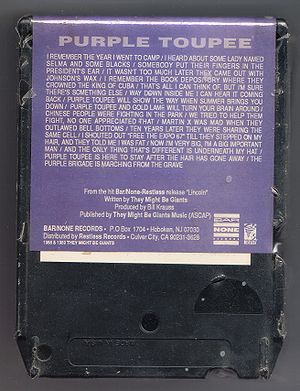 Purple Toupee 8-track tapes do not actually contain "Purple Toupee" — or any music by They Might Be Giants, for that matter. John Flansburgh once mentioned that the tapes were purchased in bulk from Motown Records. By the time that the cartridge was released in 1989, 8-tracks had been widely phased out for several years, and this "release" was simply a promotional stunt. Due to the random nature of the tapes, several different shell colours are known to exist, including black, white, yellow, and purple. Similarly varied are the contents: the music contained within includes Cheech & Chong's Let's Make a New Dope Deal, a Stevie Wonder anthology, and Marvin Gaye.

To call attention to the single "Purple Toupee," by They Might Be Giants, Bar/None Records recently mailed out promotional copies-on 8-track tapes, which are about as likely to get played these days as cylinder records. Actually the format didn't matter all that much because the tapes didn't really contain "Purple Toupee" anyway, being instead old, remaindered 8-tracks to which Bar/None applied They Might Be Giants labels. The mailing, says a Bar None staffer, was a tongue-in-cheek response to the declining fortunes of the vinyl single: if the vinyl single is disappearing, you simply find another format. (The label did send out CD singles of "Purple Toupee" to radio stations.)

This information about the Purple Toupee EP was featured as a "Did You Know" article on Wikipedia on July 12, 2013[1].