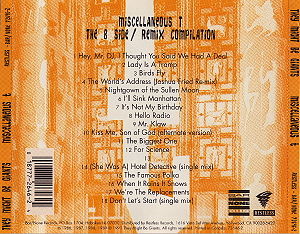 Back cover of the CD

Miscellaneous T is a compilation album first released in the United States in 1991, collecting every They Might Be Giants b-side from 1986 to 1989. It had first been released outside the US in 1989 under the title Don't Let's Start, but with a different track order and not including "Hello Radio".

Before they became the geek-rock superstars they are today, John Flansburgh and John Linnell were one of the better singles bands of the alternative era. Drawing from four of their early singles, the B-sides collection Miscellaneous T actually outshines its origins more than once: the nasty payola anthem “Hey, Mr. DJ, I Thought You Said We Had A Deal,” the bitter-romance ode “I'll Sink Manhattan,” and the goofy, likeable “The Famous Polka” are all A-list material. There album also contains some terrific new takes on previously issued material; the Josh Fried remix of “The World’s Address” is a winner, sounding for all the world like a future echo of Beck, and the alternate version of “Kiss Me, Son Of God”—a crazed bit of class warfare filtered through Frank Sinatra and chanson—is far superior to the original.