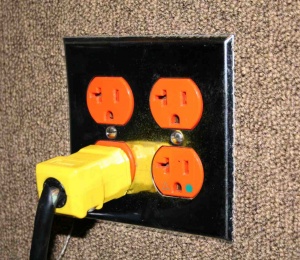 Direct from Brooklyn's own They Might Be Giants, this is the only authorized and official podcast from the band. Often imitated, never remunerated. Specializing in original, live and/or rare material from the band, please enjoy TMBG's finest podcast!

Hello everyone, this is John Flansburgh from They Might Be Giants. Welcome to Podcast 36B! It's a special bonus edition of They Might Be Giants' audio podcast. Today we are going to be playing the entire 1993 Hello CD of the Month Club Sampler. It was a promotional disk for the Hello CD Of The Month Club, a project I started with Marjorie Galen. Kind of like a record company, but not ambitious like a record company; more just an outlet for, uh, side projects and bands we were interested in helping along the way. First up on the sampler was the famous Frank Black, Black Francis from the Pixies, performing an acoustic version of "Sir Rockaby." Then you'll hear "Banana" by a Japanese band called The Nelories that John and I first heard in Japan. And then there's a collaboration with me and Joshua Fried performing the song "Hello Hello," originally a hit by Gary Glitter, by the band Hello The Band. And then I will be back to tell you about the other tracks later. But let's get into the music right now, with Frank Black and "Sir Rockaby."

Alright! We're back with three more tracks of the Hello CD of the Month Sampler, ladies and gentlemen, in this special bonus edition of They Might Be Giants Podcast, Podcast 36B! And the third track is The Residents performing Teddy. If you don't know about the Residents, they were a band out of San Francisco — still a band out of San Francisco, a very mysterious band. They never show their faces. Do a very singular kind of music. Very influential on They Might Be Giants in the early days on a number of different levels: not just musically, but in their sort of, uh, worldview of how to present their band. Then, before that, we are going to hear Brian Dewan doing the track "Obedience School," recorded for Hello. Brian is a visual artist as well as a songwriter, a very talented musician, and he did the cover for the Lincoln album and is on many album covers. And then, first up, we have a famous set of people: Scott McCaughey from Young Fresh Fellows joined back-up by Peter Buck of R.E.M. and Tom and Terry of NRBQ in the band The Minus 5. This song is called "Loser So Supreme."

And that was "Teddy" by The Residents. You are listening to They Might Be Giants Podcast 36B, a special Hello CD of the Month Club Sampler edition. Right now we are going to hear a track by The Band of Weeds. This was a project that Kurt Hoffman put together. Kurt Hoffman did the arrangement for "S-E-X-X-Y" and has worked with Jon Spencer's Blues Explosion. He is a very talented musician. He was a side-man in our touring band for a couple of years in the early days of They Might Be Giants as a full band. He currently has a combo called Les Chauds Lapins. They do French chansons and are a very interesting project well worth checking out. This is a track called "Blow, Wind, Blow," and it's Kurt Hoffman's Band of Weeds.

Awww yeahh! That was Flat Old World with "Angel's Voice," and before that: Eugene Chadbourne, "Dreamt I Was Young Again," all off the Hello CD of the Month Club Sampler from 1993. Flat Old World were a big mob of a band, led by Mark Lerner. Nancy Lynn Howell was in the band, Robin Goldwasser was in the band, drummer Mark Donato who worked with John Linnell on the State Songs project was in the band. A lot of very talented people in that group. And before that—Eugene Chadbourne. The very talented, and the very alone, Eugene Chadbourne performing "Dreamt I Was Young Again." Eugene opened for They Might Be Giants at a million billion shows in the 90s, and, uh, he's a nut. The guy is a nut. So we want to thank you for podcasting in. We've got just one more track. This is from the Duplex Planet, and it's called "That's Halloween."