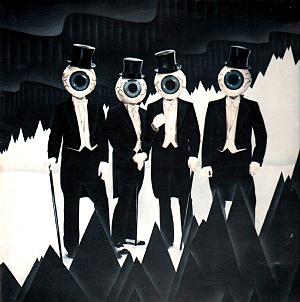 The Residents is an avant-garde music collective and performance arts group. They are known for their eccentric, surrealistic performances and recordings. They have remained resolutely anonymous, typically appearing in disguises consisting of top hats, tuxedos, and eyeball masks. In 1993, they released an EP entitled Prelude To "The Teds" for John Flansburgh's Hello CD Of The Month Club. In the Hello Recording Club Newsletter, Flansburgh wrote:

The Residents are from Louisiana by way of San Francisco. Unique, independent and shrouded in secrecy, the group has been recording since the early Seventies. Always at the forefront of music and technology, the Residents were one of the first bands to use synthesizers as a primary element in their sound. After years of assembling clever film clips for their music, they were one of the first acts to be featured on MTV. Now they are moving into interactive video with the release of Freak Show. Listeners interested in exploring the world of the Residents should call their 800 number listed on the sleeve.

(I can personally recommend a variety of their musical releases: The Commercial Album (possibly the perfect lp for the uninitiated), Duck Stab, Eskimo, The American Composer Series of James Brown and George Gershwin, The King and Eye or their recent Freak Show.)

Both Flansburgh and Linnell are fond of The Residents. The influence of the group is evident in a number of They Might Be Giants songs, particularly "Indian Ocean". Many early TMBG demos—such as "Happy" and "The Big Big Whoredom"—also reflect their highly erratic experimental style. The video for "Ana Ng" features shots of a fish tank with a statue in it, played in reverse--similar to the opening shot of the Residents' famous "One Minute Movies" short. "Cyclops Rock" and its accompanying e-card video appear to have been at least partially inspired by The Residents' giant eyeball masks.

Some TMBG fans have speculated that the "Fingertips" series on Apollo 18 could be an homage to The Residents' Commercial Album, which consists of 40 one-minute jingle-like vignettes, one of which is called "Fingertips". However, Flansburgh has denied these theories.[1]

In 2018, as part of Dial-A-Song, the band recorded "Door To Door Minotaur," a tribute to founding member Hardy Fox. Fox had died earlier that year.

In preparation for the 2021 officially-authorized book The Residents: A Sight for Sore Eyes, Vol. 1, Linnell stated:[2][3]

It is still astonishing to listen deeply to these records--packed with ideas and so breathtakingly original. Like The Beatles, they seemed to be open-eared and unschooled. You could sense their excitement at discovering everything on their own and inventing music from scratch. The Residents kicked open the doors to enhanced musical realms that bands like ours found irresistible. You can hear how much we owed to them in our early recordings.