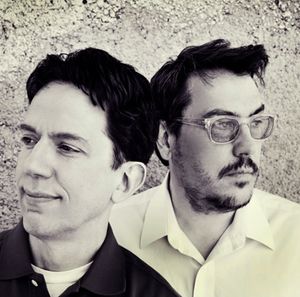 Grouping: Among beloved things that you treasure

In slums, migrant worker camps, Indian reservations--wherever[John Flansburgh's voice:] THEY MIGHT BE GIANTS [original voice:] is poverty is. That's where—Now, meet our guest.

All rise, all rise everybody, it's Cecil Portesque and They Might Be Giants Podcast. What'd you hear? I'll tell you what you heard. You heard Dirt Bike with the Other Thing. Then, from the Wiggle Diskette, the first thing They Might Be Giants ever released, Everything Right Is Wrong Again. Packing A Ton Of Stuff from the Dunkin' Donuts sessions. Sidewalk Whirlwind from Cast Your Pod To The Wind. The demo to Electric Car. Where Your Eyes Don't Go from Nick Hill's radio program on WFMU. The theme to Podcast 2A. I Blame You, that's of course from uh, some compilation thing. Mr. Me from They Might Be Giants Other Thing again. And then you heard When It Rains It Snows. I'm your host Cecil Portesque. Wanna thank you for podcasting in, wanna encourage you to go to some They Might Be Giants live shows, ladies and gentlemen. 'Cause They Might Be Giants are performing all across the United States in the next six months. Go to theymightbegiants.com or their Facebook page or check out that Twitter feed that Flansburgh's rockin'. So let's get back to the music everybody, this song is called Robot Parade!