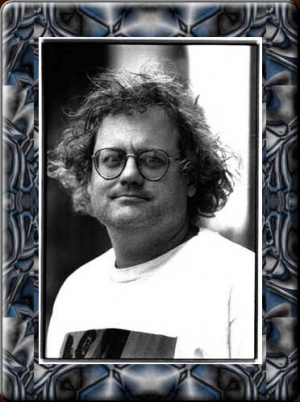 Eugene Chadbourne has been composing, performing, and writing about music since at least 1975. Among his innovations are creating a musical instrument from a garden rake and arranging for and performing Bach, Captain Beefheart, and Frank Zappa compositions on the banjo.

He's collaborated with an astounding number of artists over the years, including Camper Van Beethoven, John Zorn, Henry Kaiser, and Jimmy Carl Black. In addition to his solo efforts and collaborations, he also led the band Shockabilly in the 1980s.

He worked with TMBG by providing the phoned-in guitar solo on "Absolutely Bill's Mood". In 1993, the Hello CD Of The Month Club released one of his EPs. He also opened for TMBG in concert several times in the 1990s.