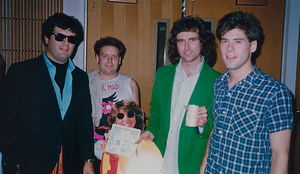 The Young Fresh Fellows in their earlier days

The Young Fresh Fellows are an American alternative rock group that was formed in 1982 in Seattle, Washington. They opened for TMBG on several occasions in 1992. In "Twisting", the group is directly referenced with the line, "she doesn't have to have her Young Fresh Fellows tape back now". John Flansburgh has claimed the song was partially influenced by the Fellows.

Mono Puff covered one of their songs, "Hillbilly Drummer Girl". Additionally, The Minus Five, a band led by YFF frontman Scott McCaughey, released an EP through the Hello CD Of The Month Club, and one of their songs was featured in Podcast 36B.

Tad Hutchinson, the drummer for YFF, designed a T-shirt for They Might Be Giants that featured some instrument-shaped hats (see it here).