From This Might Be A Wiki
(Redirected from Nelories) 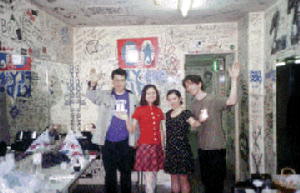 John and John with The Nelories, 1995

The Nelories was an independent Japanese band that was active in the 1990s. Like They Might Be Giants, the band was a duo, which consisted of Jun Kurihara on accordion and Kazumi Kubo on guitars. They explored various styles of music in their recordings. TMBG called them Their "Japanese counterparts". Despite it being her second language, Kurihara wrote all the songs in English, leading to abstract and often highly surreal lyrics.

John Flansburgh discovered The Nelories in December 1992 while shopping for records in Japan during the Don't Tread On The Cut-Up Snake World Tour. He realized they'd be perfect for the Hello CD Of The Month Club. Their self-titled EP on Hello in 1993 was their only US release.