This page is for the album. For the song of the same name, see Nanobots (Song).

Nanobots is the 16th album by They Might Be Giants, released on March 5, 2013. It was preceded by Nanobots EP, an advance digital EP released January 22. The album was released through Idlewild Recordings, and manufactured and distributed by Megaforce Records. Lojinx handled European distribution, and Breakaway was responsible for the Australian release.

The artwork was designed by Paul Sahre and features collages by Sam Weber. His Ingres is the cover image, based on Ingres' painting of Princess Pauline-Eleonore de Broglie. The others used are Hansel (back cover), Step Mother (inner LP sleeve/CD tray), Jester(clown), and Blue Beard 2 (labels). Sahre stated that "dozens, if not hundreds" of different ideas for the cover's text formatting were considered.[1]

Of the overall style of the album, Flansburgh assesses that "it's mostly combo/small spare arrangements a la Join Us, but we'll figure out how to over-produce it!"[2] In an interview with Billboard, Linnell said, "I think we've added to the number of things we do. With the last album there were a number of cases where we were like, 'Oh we've never tried this before,' and it was fruitful. And we're still working in those departments." Curiously, many tracks from the album are under twenty seconds long. This is reminiscent of the "Fingertips" selections from Apollo 18. Of these short songs, Flansburgh stated:

We came of age in the time of albums, so we were raised on the notion that songs—when collected together—serve to amplify and support each other when part of a well-considered collection. That's the power of the album. With Nanobots we weren't making a concept album, but it does have a certain power as a kind of song cycle. These short little tiny songs have a purpose and they make sense when surrounded by the longer songs. There's a certain mania to this record, a certain energy you get when you include all these hard working miniatures.

Flansburgh has stated the album title was chosen at the "very last minute".[3]

The press release for the album from Girlie Action also adds:

Nanobots finds the band in fine form. Title track 'Nanobots' puts a dark cartoonish spin on the world of technology while the call and response chorus and percussive guitar line of 'You're On Fire' dares even the grumpiest wallflower not to dance. Blending the band's signature storytelling, some dueling horns and sly humor, 'Call You Mom' is a caffeinated pop gem. 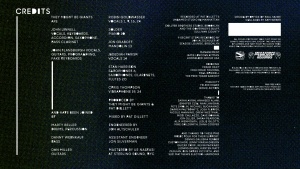 The album was recorded in New York City with the aid of Pat Dillett. Recording began in early 2012, following the conclusion of the Join Us tour. John Flansburgh teased various tracks and revealed small quantities of information over the summer. In early May, he posted a video to yfrog of the band back in the studio. He also posted a short video of the band working in-studio on "Circular Karate Chop" on July 24. The next day, he posted another video, this one of Dan Miller playing keyboard for "Lost My Mind". Recording continued between May and December, with the final track, "Great", recorded on December 19.[4] Titles were steadily revealed throughout the year via Twitter and Facebook.

Recording was interrupted during the powerful Hurricane Sandy in October 2012. According to Flansburgh:

We really lost like a full week of production time, and that kind of curtailed some of the good times. There was no electricity in the studio. Everything was [messed up]. It was kind of a scary time. I'm really glad that it didn't go on any longer. I think even if had gone on a couple of more days, there would have been a lot more looting and a lot of bad [stuff]. There actually was looting. That was the thing, there was kind of a PR campaign to downplay what was happening, but there were definitely some shenanigans going on there.[5]

The album featured numerous guests joining the band in-studio. Stan Harrison returned for horn arrangements and various woodwind instruments. The band also recruited Jon Graboff to play mandolin for "Hive Mind". Graboff had previously appeared on Laura Cantrell's Hello EP, which John Flansburgh produced. Jedediah Parish, of the Loser's Lounge, and Chris Thompson also appear as guests. Mike Doughty collaborated with the band on the track "Dawn Divine", which was recorded but did not appear on the final album. Instrumentation includes handclaps, bass clarinet, contra-alto clarinet, mandolin, vibraphone, and the return of accordion. A number of keyboards and electronic instruments are also used, including Moog and Alesis synthesizers, a Casio CZ-101, a Baldwin Fun Machine, a Wurlitzer electric piano, and the Suzuki Omnichord.

To promote the album, the band embarked on the multi-leg Nanobots tour, which included, for the first time since 2001, a visit to Australia. The Johns also made stops in Europe and Canada. Some tracks from the album were premiered during the band's set of 2012 New Year's Eve shows. Three tracks, "Call You Mom", which had previously been released through Rolling Stone, "Lost My Mind", and "Black Ops" were released in advance on Nanobots EP in January. On the same day, the cover artwork for the album was also made available. In February, "You're On Fire" became available through StereoGum. Fully embracing the Internet's adopted free music model, TMBG released Nanobots in its entirety via SoundCloud one full week before its official release date. In promotion of the album, the band was interviewed by innumerable college radio stations. They also released the free They Might Be Giants app for iOS and Android devices.

"Lost My Mind" and "You're On Fire" were released as promotional singles as well as "Circular Karate Chop" (in the UK), with "Call You Mom" serving as the de facto single, widely available as a free download several months before the release of the album.

The album was accompanied by a vinyl release, which was available as an extra option to be bundled with 2012 They Might Be Giants Instant Fan Club memberships. Initial LP test pressings were completed by January 17, 2013.[6] Due to a "production delay", the LP release was postponed until two weeks after the CD. The iTunes LP edition comes with 6 videos for "Hive Mind", "Insect Hospital", "Great", "Nouns", "Decision Makers", and "There".

Four announced song titles do not appear in the official track listing: "Dawn Divine", "Stalker In Reverse", "Prepare" and "Lucky You". It is not yet known whether these songs were taken out, or whether they appear on the album under different names. "Dawn Divine" was slated to feature Mike Doughty.

The Australian release comes with a bonus disc containing selected tracks from At Large. However, due to an apparent packaging issue, many copies for sale lack the disc; those that do have it loosely bundled in a clear plastic sleeve.