Join Us is They Might Be Giants' fifteenth studio album, an "adult" rock album, released physically on July 19th, 2011 and through some digital venues (including iTunes) a day earlier. It was released on the Idlewild and Rounder labels. A four-song preview EP was released digitally on April 26, 2011.

With the beginning of this record, we were kind of staring at the blank page and a little bit intimidated by what we wanted to do. When we started They Might Be Giants, there was something singular about our point of view. We wanted to get back to our beginner's mind about the elements we're combining. 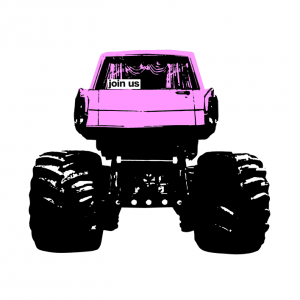 "The rear view of TMBG's Join Us pink hearse."

They Might Be Giants began recording Join Us in March 2009, according to a July 2009 interview with Billboard, wherein John Flansburgh also mentioned that eight songs had already been recorded.

In June 2010, one track from the upcoming album, "Three Might Be Duende" was partially released as a 13-second clip from the recording studio on YouTube. In addition to the band, long-time producer Pat Dillett and engineers Yukihiro Takahashi (The Else) and Greg Thompson could be seen in the studio. A similar clip for the rhythm section tracking of "Canajoharie" was released in July, though the clips are no longer available on the band's YouTube channel. Both of those songs were played live occasionally during the band's fall 2010 tour.

In a February 2011 Facebook post, the band wrote "TMBG are in the studio. Today's working titles: Judy Is Your Viet Nam and You Probably Get That A Lot."[1] A new EP to be coming soon was also mentioned. Another Facebook post in February stated that the EP would be an "album preview" due out via iTunes in April.[2] One month later, on March 14, 2011, John Flansburgh announced via a Spinner.com interview the name of the album—Join Us—as well as the cover art for the four-song iTunes preview due April 26, 2011. Another YouTube clip was released alongside this news, of Marty Beller performing a drum fill in tribute to Phil Collins for the song "Celebration." On April 8, the band uploaded two more clips of Curt Ramm playing trumpet for "In Fact" and John Flansburgh shouting for "You Probably Get That A Lot" and announced them on Twitter.

An incomplete track listing composed of fourteen songs was revealed on Pitchfork.com on April 5. The track list was updated to include four more ("Canajoharie," "Celebration," "Dog Walker," and "Spoiler Alert") on the band's Facebook page on April 26.

Hot off the success of Here Comes Science, the band wanted to return to their "insane" sound of the 1980s before recording began. Flansburgh commented on the album concept, in a November 2008 interview with Fredericksburg.com, stating: "I think [for] this next rock album, my ambition for it is to blend more of the home-recording techniques that we presented in the '80s with modern sounds. I'd like to make a more insane-sounding record, to be perfectly honest." In the beginning of the recording of Join Us, TMBG experimented with new musical directions. Flansburgh commented that some of the early songs sounded like "Spike Jones and Kraftwerk falling down the staircase together." However, many of the early songs recorded during the Join Us sessions were eventually scrapped, with the album primarily consisting of those songs that were recorded toward the latter half. In an interview with The AV Club, Flansburgh commented, "We probably recorded 30 songs for this album, and the songs that are on album are basically the last 15 or so. There were so many strange misfires at the beginning, just the most mutant songs." Some of the songs that were left off Join Us were later completed and released on the rarities compilation Album Raises New And Troubling Questions.

A chart showing the performance of Join Us on the CMJ charts.

Join Us debuted at No. 32 on the Billboard 200 after selling 13,000 units in its first week of release, making it the highest-charting album of They Might Be Giants' career. Online sales accounted for 69 percent of the album's sales in its first week, according to Billboard's July 28, 2011 chart recap. Join Us also debuted at No. 8 on both the Billboard Rock and Billboard Alternative charts.[3] It disappeared from the charts the following week.

Two de facto singles emerged: "Can't Keep Johnny Down", which was released as a free MP3 on Pitchfork's website on April 5, as well as a promotional CD, and "You Probably Get That A Lot", which was promotionally issued in the UK. Music videos were produced for both songs, the former starring Rip Torn, though neither track charted. Music videos featuring the band were also produced for "Spoiler Alert" and "Cloisonné". The music video for "When Will You Die" featured the construction of a life-size monster hearse by the Office of Paul Sahre. It went viral with over 25,000 views in a month, eventually reaching more than half a million total. Sahre's artwork for Join Us was also very well-received; it was nominated for a Design of the Year Award by the Design Museum.