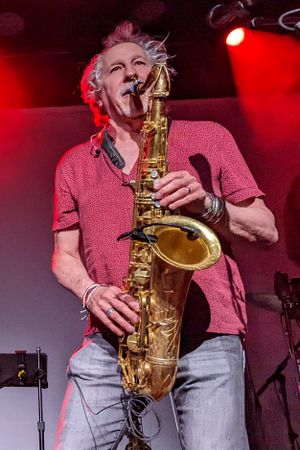 Stan Harrison performing with They Might Be Giants on June 8, 2022

Stan Harrison is a jazz musician who has toured with They Might Be Giants on multiple occasions.

In 2006 and 2007, Stan joined the band as part of the Velcro Horns, playing saxophone. Since mid-2007, Stan has played saxophone as part of TMBG's occasional touring horn section, the Tricerachops Horns.

He joined TMBG in the studio to record some songs from The Spine, The Else, Here Comes Science, Join Us, Nanobots, and Glean. In addition to saxophone, Stan played flute on "Electric Car", and bass flute on "Spoiler Alert". He also created the horn arrangement for "Cloisonné". Harrison also appears on "The Darlings Of Lumberland" and three songs from the first half of the 2015 Dial-A-Song (2015) project.

In addition to working with the Giants, he has worked in the studio and toured with such acts as Diana Ross, Duran Duran, Radiohead, David Bowie, and Jonathan Coulton.