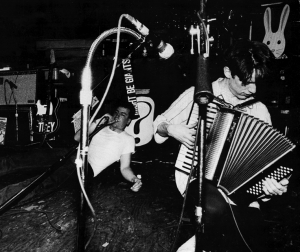 The accordion is a free-reed aerophone instrument, played by John Linnell. Despite seeing only rare use in rock music, it has been a staple of They Might Be Giants' music since 1984, and was featured as far back as the 1985 Demo Tape and TMBG's debut album. John Linnell claims to have picked up the accordion because it was a more portable and accessible version of a keyboard, an instrument with which he was already very familiar. This accounts for the fact that Linnell mostly favors the keyboard side of the accordion while playing. Up to the late 90s, it was also the instrument on which Linnell most commonly wrote songs.

Linnell started playing the accordion in 1983, after borrowing one from a friend who lived in his apartment building,[1] for use in an outdoor busking performance on the Brooklyn Promenade[2]. Another story states that he was "at a party at someone's house and kept borrowing [their accordion]."[3] Linnell explained his adoption of the instrument in a 1996 interview:[4]

I'm a keyboard player. When John and I started, I played organ and clavinet. We tried a bunch of different things and a friend of ours had an accordion that she had played when she was a kid and she had sort of given up on it. She loaned it to me. We used it in a show we did on the street in Brooklyn and it just made so much sense from so many different angles. It was the right instrument for the kind of material we were doing, it was a portable instrument you could play outside and it looked cool. It just looked very fresh to me, like something that was kind of interesting to look at and it's a very dynamic keyboard instrument. It's like an organ except you really have a lot of dynamic control over it.

How many accordions does Linnell own? I've seen him playing a few different ones at different shows.
I've got seven that I've used at live shows. My original Walters which dates from 1928 and is now too fragile to take on the road, a "Music Mart" which you can see in the live photo on the back of the "Don't Let's Start" EP, an Excelsior that I played in the early 90's which has many busted off ivories and two grills that look like bug eyes, a gigantic and burdensome "Marinucci Recanati" (I don't know which name represents the manufacturer) a tiny Chinese accordion that is good for radio shows, and two Hohners, one old and black, one brand new and red.

When They Might Be Giants performed as a duo in the 80s and early 90s, John Linnell would primarily play the accordion at live shows, unless a particular song (such as "Lie Still, Little Bottle") called for his instrumental talents elsewhere. This continued into the mid-90s when TMBG's live touring outfit included keyboardist Kurt Hoffman, which allowed Linnell to continue to play the accordion for the majority of a show. As time went on, Linnell's primary instrument at live shows became the keyboard, though there are many songs in the band's live repertoire that still utilize the accordion. The Else was the first They Might Be Giants album to not feature any accordion, and Join Us only features sparse, if any, accordion.

Over the years, John Linnell has used many accordions in the studio and at live shows. Some of these are listed below.