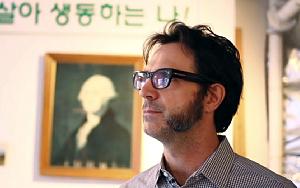 Paul Sahre (pronounced "SAY-er") is a prolific New York-based graphic designer, heading the Office of Paul Sahre (abbreviated to OOPS). Sahre has collaborated copiously with They Might Be Giants, creating artwork for albums, merchandise, and co-designing the TMBG app with Hine Mizushima. Flansburgh has referred to Sahre as "the Jay-Z of graphic design". Sahre has been a fan of TMBG since calling in to the Dial-A-Song service in his design school years.[1]

Sahre's wife, Emily Oberman, is also a graphic artist and works for the firm Pentagram. She was responible for the 2012 animated music video for "Alphabet Of Nations", as well as the limited-edition poster and T-shirt. Proceeds from sales benefited the Global Fund for Children.

John Flansburgh had originally contacted him to make a small cover for the advance digital release of four tracks from their upcoming album, which at the time had been titled Necropolis. The image, which was of a monster truck hearse crushing the well-known graphic design standby Helvetica, was so well-received that it became the official Join Us album art. Sahre designed the cover, labels, and compact disc of the album for TMBG, as well various images of the cover's pink monster truck hearse (dubbed "monster hearse"), and individual pieces for "Can't Keep Johnny Down", "Cloisonné", "Never Knew Love", and "Old Pine Box". A number of similar images featured throughout the digital and physical liner notes—included as part of vinyl and CD releases—of Join Us were also designed by Sahre, in addition to the liner notes themselves. For the album's packaging, Sahre was nominated for a 2012 Design of the Year Award from the Design Museum. John Flansburgh spoke very highly of his work in an interview with Gothamist. He had this to say of the pink hearse:[2]

...it's a pretty classic combination of stuff that we are. We're American, we're on a death trip. We're into things that are fucked-up. Need I go on? Cars! What's more universal than large ridiculous big-wheeled cars?

Sahre also designed the labels for TMBG's Other Thing Brass Band, Four Covers From TMBG, and the exclusive Instant Fan Club 7" EPs, as well as a limited-edition T-shirt that was available for a few days on theymightbegiants.com. He created the artwork for Album Raises New And Troubling Questions, including the cover, liner notes, and, for downloads from tmbg.com, instructions for constructing a paper model of the Join Us monster hearse as well as the accompanying boombox and Abraham Lincoln action figure. Sahre's office put together a life-size paper model of the monster hearse.[3] The model hearse's construction is largely featured in the 2012 music video for "When Will You Die", in which Sahre himself and some of his employees appear. The video was produced by Flansburgh and Sahre, and directed by Sahre and Joe Hollier. The 500 pound model used 6,000 square feet of cardboard.[4]

Paul Sahre designed the artwork for the TMBG's sixteenth studio album, Nanobots, as well as its preview EP. The artwork surrounding the album, including liner notes and LP labels, copiously employs collages of fine art done by Sam Weber. Text from the album cover was featured on a Nanobots T-shirt and hoodie on the TMBG merch store, and the album cover graces a poster available from Lojinx, the UK label for the album. A Nanobots-styled THEY can also be found on Marty Beller's bass drums at live shows, and MIGHT on the display bass.

In 2014, Sahre and Joe Hollier collaborated with TMBG and other artists on a music video for "Tesla", along with seven remixes of the song and two original songs. The videos were mainly shot on 8mm film. When asked[5] which project in his career he is most proud of, Sahre answered with a discussion of the Tesla remix videos. He also provided the cover art for the Idlewild compilation. 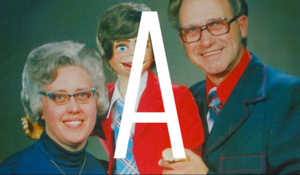 Screen from the dialasong.com intro video by Sahre

Sahre continued his collaboration with the band through the release of their seventeenth studio album, Glean, which was released in April 2015. Sahre's firm created the artwork surrounding the album across its digital and physical releases. John Flansburgh provided creative input on the artwork, which includes photography by Jason Fulford and illustrations by Sahre and Frank H. Netter.

Sahre also handled visuals for the 2015 revival of Dial-A-Song, including designing its logo and the new dialasong.com, collaborating with Flansburgh and developer Tyler Madsen. In addition, the music video for "Erase", Dial-A-Song (2015)'s premiere, was directed by Sahre. Later in 2015, Sahre co-created the video for "ECNALUBMA" (with Todd Goldstein), directed the videos for "Omnicorn", "Trouble Awful Devil Evil", "College Town", and "I Love You For Psychological Reasons", and contributed to the video for "Apophenia".

Sahre continued his collaboration with the group for 2021's BOOK. He was largely responsible for the typography layout for the physical book accompanying BOOK. The band had long wanted to release something in the vein of the Beatles' 1969 lyrics book; under direction from Flansburgh, Sahre worked with street photographer Brian Karlsson to put together the concrete poetry for song lyrics from BOOK and some songs from the 2018 iteration of Dial-A-Song.[6]

Instant Fan Club and other merchandise[edit]

Paul Sahre does most of the graphic design work for the They Might Be Giants Instant Fan Club. Most notably, he designed the escape button and padlock logos used on Fan Club exclusive releases, shirts, and certificates. In 2012, Sahre created commemorative Franklin D. Roosevelt IFC coins, IFC patches, and graphics for a limited-edition poster, all of which were distributed to the year's Super-President members. The 2015 fanclub was commemorated with a cat-themed Super-President coin.

Sahre was heavily involved in designing items packaged in the 2012 holiday merchandise bundle from theymightbegiants.com. Sahre did the artwork for Them Ain't Big Eye Ants, a 2012 TMBG music video compilation DVD, as well as the first ever set of TMBG playing cards. The cards, initially available as part of the 2012 holiday merchandise bundle, feature four new suits: Cryptids, Myths, Hoaxes, and Paranormal. Illustrations for the set were done by Merman. Some of the images were also featured on a set of guitar picks and a sticker packaged with the bundle, and later on a shirt available through the TMBG merch store. A set of reproductions of mid-80s TMBG posters was also included in the holiday bundle, packaged in an envelope designed by Sahre's office.