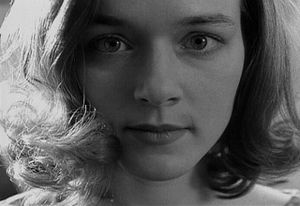 Laura Cantrell from the music video for "The Guitar"

Laura Cantrell is a country singer-songwriter and was the host of "Radio Thrift Shop" on Jersey City's WFMU from 1993 to 2005. In 1992, she collaborated with They Might Be Giants for "The Guitar (The Lion Sleeps Tonight)" on the album Apollo 18, and appeared in the song's music video.

John Flansburgh was so inspired by her cover of Don't Break The Heart that he covered the song himself with Mono Puff. In 1996, Cantrell released a her debut EP on the Hello CD Of The Month Club. She later thanked Flans and Robin in the liner notes of her 2000 album Not the Tremblin' Kind.