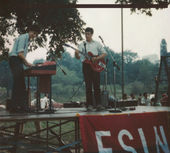 Keyboard instruments have been an integral part of the They Might Be Giants studio and stage performance since the band's formation. They Might Be Giant's very first show, in Central Park in 1982, included John Linnell playing an electric jazz organ; "Now That I Have Everything", TMBG's first demo, also features an electric keyboard. The majority of They Might Be Giants songs feature either an electric keyboard or some other keyboard instrument. Many early TMBG recordings, including tracks from the 1985 Demo Tape, The Pink Album, and Lincoln were recorded at the Public Access Synthesizer Studio (Studio PASS), where the Johns had access to a large collection of electronic keyboards and rack mounted units, including the Fairlight CMI and Yamaha TX816 (a rack mounted version of the better known DX7).

When They Might Be Giants made the move to a full band lineup in 1992, Kurt Hoffman became their live keyboardist, with Linnell playing accordion or saxophone. However, during the John Henry tour in 1994, John Linnell took over as the primary keyboard player. With the current line-up, guitarist Dan Miller or bassist Danny Weinkauf will occasionally play keyboard live on songs which utilize Linnell to play other instruments, often accordion, saxophone, or bass clarinet. 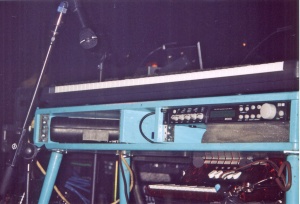 At TMBG's first live show in 1982, which was played under the name El Grupo De Rock And Roll, John Linnell played a red Farfisa Combo Compact organ. Farfisa Compacts were popular electronic organs manufactured in the late 1960s, before synthesizers rose to prominence. The same model can be seen in some promotional photographs taken in the 1980s. Before the formation of TMBG, this was also the keyboard Linnell used in performances with The Mundanes, with a monophonic Micromoog mounted above it for solos and leads.

In 1989, Linnell and Flansburgh each bought their own Casio FZ-1 synthesizers to record Flood. The FZ-1, which was first manufactured in 1987, was a 61-key polyphonic keyboard that also functioned as a sampler. The keyboard can be heard on various Flood tracks, including "Istanbul (Not Constantinople)".

John Linnell's live keyboard rig from 1994 until August 2006 consisted of a black Roland A-30 76-key MIDI controller connected to a rack-mounted synthesizer module. Linnell's current sound module is an E-Mu Proteus 2000, which was first manufactured in 1998. Prior to this, Linnell would occasionally run the MIDI controller into a Micromoog (for instance, for live performances of "AKA Driver"), but presumably used an earlier rack-mounted synthesizer for most songs. The generic keyboard stand Linnell had originally used was replaced in 1998 with a custom stand built by Brian Dewan's music company, Dewan Luxury Products. The same company has constructed all of Linnell's subsequent stands. In late 2002, the rig was expanded to a more complex unit to accommodate a Roland SP-303 sampler, to trigger sound effects (notably on songs such as "Bed Bed Bed" and "Hot Cha"), and a Korg Kaoss Pad KP-2, a small effects processor and MIDI controller that is operated through an XY axis touch pad. The Kaoss Pad has appeared in a segment called "The Future Of Sound", as well as some songs with spacey effects, such as "Space Suit" and "Robot Parade". In 2003, the power strip connected to the stand was replaced with a more permanent outlet fixture.

In 2006 to 2007, Linnell began using a light grey Roland Fantom X6, a 61-key workstation including instrument sound programming and a pad bank for triggering samples and other sound effects. In May 2007, Linnell switched to a light grey Roland Fantom X8, which is Roland's 88-key version of the X6. A wider wooden support board was added to the stand to accommodate the larger keyboard, and in July, the legs were removed to allow the base sit on top of a traditional metal keyboard stand. Due to its relatively small size, the X6 was still occasionally used for more stripped-down performances after its replacement.

Since January 2020, Linnell has been using an 88-key Arturia Keylab as his main controller. The KP-2 Kaoss pad has also been supplanted by a Kaossilator Pro. Each unit is downmixed through a Radial JD6 DI box, which goes to PA stereo output.

For the Else and Here Comes Science tours (2007-2009), along with one show in October 2010, Dan Miller played a microKORG on stage.[1] He can be also be seen with it in the video for "Electronic Istanbul", which also features Danny Weinkauf playing an Alesis micron.

When they played I'm Impressed on Late Night With Conan O'Brien in 2007, Dan played a Nord Lead 2X.