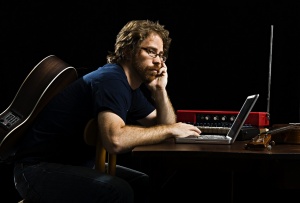 Before Coulton became a musician, he worked as a software designer and began writing music in his downtime. During this time, he released two albums, inspiring his decision to pursue music full-time. He is a longtime They Might Be Giants fan, and he says that "we share a sensibility that I stole from them." His assistant, Drew Westphal, has also collaborated with the band, notably on their free mobile app.

He is also a long-time friend and collaborator of John Hodgman, and was mentioned in "Hodgman Promo 1" as the nefarious cat sitter. Hodgman initially recommended Coulton as an opener for TMBG.[1]

At his concert in Chicago on October 10, 2009, Coulton, along with Paul and Storm, played Flood in its entirety so that fans missing TMBG's Flood show the same night in Chicago would not be disappointed. Coulton's tribute was mentioned in TMBG's newsletter. Coulton, Paul and Storm would later cover all of Flood again in Brooklyn, NY in 2018.

Shortly after the 2009 Flood show, Coulton began opening for TMBG at 2010 shows, at which time John Flansburgh began collaborating with Coulton in a producer role. Flansburgh, along with Pat Dillett, helped produce "Want You Gone," Coulton's musical contribution to the video game Portal 2 (which followed up Coulton's "Still Alive" from Portal). Coulton said:[2]

The opening musical idea was inspired by a drum loop that Flansburgh sent me, part of a giant "inspiration pack" of drum loops to help kick start some songwriting for my album. It just seemed to fit what I was doing with the Portal song, so I tweaked it and stuffed it in. [...] John Flansburgh and Pat Dillett and I messed with the arrangement [and] it was Flansburgh's idea to drop out the instruments on "Oh, did you think I meant you?" which still gives me shivers.

In early 2012, Flansburgh accompanied Coulton on the second sailing of the JoCo Cruise as an entertainer. They Might Be Giants later joined the JoCo Cruise for its ninth sailing in March 2019 to perform an outdoor show in San Juan, Puerto Rico. However, a storm forced the band to perform a truncated show aboard the cruise ship while docked in San Juan.

Coulton was the in-house musician for the NPR game show Ask Me Another, which featured They Might Be Giants and John Flansburgh on multiple episodes. Coulton also appeared alongside TMBG on the compilation album Many Hands: Family Music For Haiti.