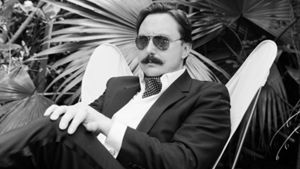 A former McSweeney's literary agent and cheesemonger, John Hodgman has become what he has most feared: a professional writer. His book The Areas of My Expertise is a compilation of mostly fictitious "complete world knowledge." He also thanks John Flansburgh and Robin "Goldie" Goldwasser in the credits.

With the millions of dollars he received from the sales of this book, he became deranged and held They Might Be Giants hostage as he threatened the band with his marauding baseball players. Had the band not accomplished the impossible feat of playing a new song for each venue they visited, chronicled in the Venue Songs, the Deranged Millionaire (who has also made an appearance in Podcast 3A and a live appearance introducing the band) would take away TMBG's musical talisman, the key to their songwriting abilities. Unfortunately for him, the plan was thwarted and Hodgman was forced to return to his loathed profession as a professional writer, composing several Little Gray Book Lectures.

He has since sought other professions, capitalizing on his unlikely name by appearing sporadically as an expert on various subjects on the Daily Show. He was profiled in the April 9, 2006 issue of Time, which you can view in part here. He also played the role of a Personal Computer in a series of Apple Mac commercials. In the animated movie Coraline, Hodgman voiced the character of Charlie Jones, for whom John Linnell voiced a song.

His amusing ramblings have seen fruition in the Hodgman Promos (which appear in The Areas of My Expertise and feature the voices of John F. and Robin), and several live shows. In 2009, he joined TMBG for their appearance on The Late Late Show with Craig Ferguson. During their performance of "Why Does The Sun Shine", he performed the spoken-word sections of the song. He also joined TMBG onstage for their New Years' Eve show in Northampton, MA in 2009.

In the summer of 2011, as part of the publicity for the release of Join Us, Hodgman served as the judge for a fan video contest for "Can't Keep Johnny Down".[1] On February 10th of 2014, in a promotional contest for the upcoming release of Idlewild, TMBG announced that Hodgman would reprise his role as video judge for a new fan contest regarding "Am I Awake?".[2] In April 2014, Hodgman appeared on The Daily Show under the name "Deranged Billionaire", indicating he might have finally found a worthwhile form of investment.

In 2020, Hodgman developed an animated detective show Dicktown on the FX Network with David Rees. The title was lifted directly the TMBG song "Can't Keep Johnny Down".[3] In 2021, he appeared on the celebrity edition of Antiques Roadshow in his adopted home of Maine. During the biographical introductory segment, a brief clip of Hodgman as "Deranged Billionaire" played.[4]