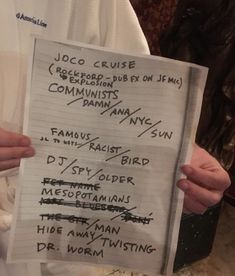 This show was originally scheduled to take place from 9:30 PM to 11 PM at Bahía Urbana in San Juan, Puerto Rico. Due to heavy rain occurring minutes before TMBG was set to take the stage, the outdoor show was canceled at 9:38 PM. TMBG's crew and JoCo Cruise staff then quickly relocated and set up most of the band's equipment on the Main Stage of the JoCo Cruise's MS Oosterdam.

Shortly after, a stripped-down version of the show took place on the boat from 11:12 PM to 11:53 PM, featuring Mark Pender on trumpet and John Linnell playing only accordion (as his keyboard had not been set up). The show's reduced length was largely due to Linnell and Pender being given temporary guest passes via customs to board the ship, which expired at midnight and would have incurred a large fee if violated.