Flood is They Might Be Giants' third studio album, released in 1990. It was the band's first album to be released on a major label, Elektra Records. Following the success of their second album, Lincoln, the band made the move from the independent label Bar/None Records.

The Johns spent two-thirds of this album's recording budget on four songs: "Birdhouse In Your Soul", "We Want A Rock", "Your Racist Friend", and "Istanbul (Not Constantinople)", which were produced by the duo Clive Langer and Alan Winstanley (who would both later work with the band again on Mink Car). Flood was also the first time that the band would work with Pat Dillett, although his contribution was as a second engineer. After Flood, Pat became a frequent producer on subsequent TMBG albums. Although the mixing process was analog, Flood was the first TMBG album to be recorded digitally. 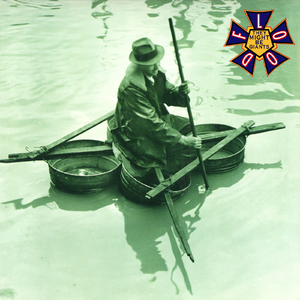 From an old interview on tmbg.com:

[The photograph used for Flood's cover art] was found by Flansburgh in the basement archives of Life magazine. It existed as only a contact print on a roll of film shot by famous photojournalist Margaret Bourke-White. It was in a series of photographs of Kentucky flood victims from around 1930. Another photograph from that very same shoot has become quite well known. It is of people standing in a bread line in front of a billboard poster of a happy family in a car with the words 'America: Highest Standard of Living.' It is featured in the 'Best of Life' and has become synonymous with the Great Depression, even though the events surrounding the photograph are unrelated to it.

Flansburgh says that when he initially found the photo, he wanted Flood's cover art to include only the image, with no text, even though it might pose a commercial risk. Elizabeth Van Itallie, Flansburgh's design-inclined friend who took the photo from the back cover of They'll Need A Crane, suggested that the image could in fact be improved with text, so she and Flansburgh created the union seal-style Flood emblem with the help of Barbara Lipp of Frieda.


The band discussed an early idea for the album's cover in a 1992 interview:[1]

[John Linnell:] "[We] were looking for a graphic that was something along the lines of a house, with a mailbox... with water half-way up the first floor. That just seemed like it would be an interesting album cover. We never found that photo though. John [Flansburgh] went through about 5,000 photos at the Time-Life archives and nothing turned up."
"It seemed like the kind of photo you've seen a million times," Flansburgh added.

In 2021, Flansburgh elaborated: "[P]utting together the cover from Flood was really about the ability to do the photo research with the Time Life archive, and that was our manager Jamie who knew folks on there. There weren't any alternate ideas, and I always knew I wanted a duotone color effect (which is to say it wasn't going to be straight black and white)[...]Cooking up the logo was something we had to clear, and then have inked by a graphic artist...so I put together that team."[2]

A chart showing the historical performance of Flood on the Billboard 200 & UK Albums charts.

Flood debuted on the Billboard Top Pop Albums chart the week of February 10, 1990, and spent 22 weeks on the chart, peaking at number 75. Sales in the UK were very strong as well, which caused the album to peak at #14 on the UK Albums Chart, and then spend a total of 12 weeks in the top 75. Despite being TMBG's most popular album, it was given a harsh "2 stars out of 5" review by Rolling Stone upon its release[3].

Flood became TMBG's first gold-certified release on December 22, 1993. As of March 2009, it had sold 783,000 units in the U.S. since Nielsen SoundScan began tracking sales in 1991. Later in July 2009, it became the band's first album to achieve platinum certification. To this day, Flood continues to be TMBG's best-selling album of all time. 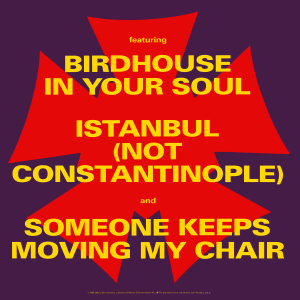 Back of a promotional flat

The album generated two commercial singles: Birdhouse In Your Soul and Istanbul (Not Constantinople); "Twisting" and "Your Racist Friend" had promotional releases. "Birdhouse" became one of the group's biggest hits in the US, spending 11 weeks on the Billboard Modern Rock Tracks Chart, eventually peaking at #3. It was most successful in Britain, reaching number 6 in the official chart. Likewise, "Twisting" spent 7 weeks on the same chart, but topped out at #22. "Particle Man" also became one of the group's most recognizable songs, but was never actually released as a single. However, both "Particle Man" and "Istanbul" were used in videos for the children's television show Tiny Toon Adventures, both of which proved to be quite popular.