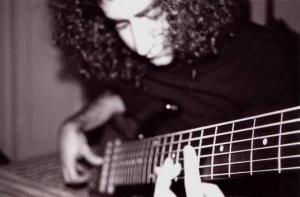 Hal Cragin was a bass player for John Flansburgh's side project, Mono Puff. You can hear some of his work on The Hal Cragin Years. It has been speculated that Cragin held the band together.

One bass enthusiast said of Cragin:

Hal Cragin's work for Mono Puff (and They Might Be Giants) is also one the most amazing pieces ever put together. His addition to their songs is something right out of classic 70's funk. Truly a show-stopper.

He played bass for TMBG on Factory Showroom (in addition to co-writing "S-E-X-X-Y") and Severe Tire Damage. Cragin was also a studio musician on Jonathan Coulton's album Artificial Heart, which Flans produced. Coincidentally, Cragin appeared as a part of the band The Scrantones in an episode of The Office, in which fellow Mono Puff artist Kate Flannery had a regular role.