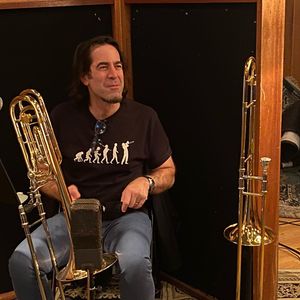 Levine in studio with TMBG for the BOOK sessions, December 2020

Dan Levine is a horn player who often joins TMBG both live and in the studio. He played trombone on "Mr. Xcitement," "Doctor Worm," "No!," and multiple songs on The Spine, Here Come The ABCs (to which he also contributed his skills as a tubist), The Else, Here Come The 123s, Here Comes Science, Join Us, Glean, and Mono Puff's It's Fun To Steal. Dan's niece, Hannah Levine, contributed some vocals to Here Come The 123s. She can be heard on "Zeroes" and "Ooh La! Ooh La!" and singing lead on "One Dozen Monkeys."

Dan and Jim O'Connor lead the Velcro Horns, and he's a part of TMBG's Other Thing. Since 1994, Dan has recorded and toured with the band, playing trombone as part of the Tricerachops Horns, which was named around 2006, being previously known in various iterations as the Velcro Horns.

Dan also worked as a studio musician on Jonathan Coulton's album Artificial Heart, which was produced by John Flansburgh.