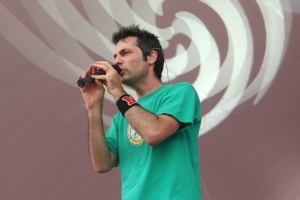 The Next President of the United States of America - Mr. Marty Beller!

Marty Beller (born July 10th, 1967) is the current drummer for They Might Be Giants. Prior to becoming the band's full-time drummer, Dan Miller had toured with Marty's band, Meow. In 2000, Danny Weinkauf asked Marty to sub for a show that Dan Hickey had a conflict.[1]

After that initial performance, he played with TMBG's Other Thing and drummed for TMBG during some bookstore performances. He also provided drums and percussion for "Impossible" and "Happy Doesn't Have To Have An Ending," two songs on the CD included with the 2003 book Bed, Bed, Bed. When Dan Hickey decided to leave the full-time in early 2004, Beller took his position as a drummer and currently tours with TMBG. 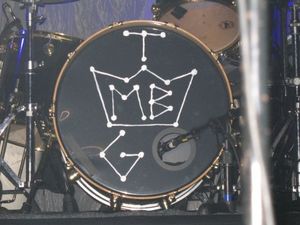 As of 2010, Marty uses a clear acrylic Ludwig Vistalite drum set, Zildjian cymbals, a Roland SPD-S, and various Latin Percussion instruments in his live set up. Occasionally, he had a Roland TD-20S, Zildjian cymbals and an additional Roland SPD-S set up on the opposite side of the stage which was used from October 2009 until October 2010.

Beller's drum kit from March 2008 until May 2010 was a ddrum kit with Zildjian cymbals, and a conga used in the setup. 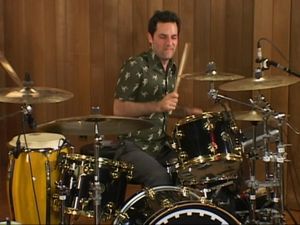 Marty Beller in the "D Is For Drums" video.

In addition to playing with TMBG, Marty and Dan Miller have their own musical production firm called MartyDan Industries. Working together, the duo has created music for film, TV, and commercials. Marty also plays with Jonathan Coulton live, as well as on Jonathan's album Artificial Heart.

Linnell revealed in this interview that Marty is the only member of the band who doesn't drink coffee, at least not as a pre-show ritual, because he's more the "clean type."