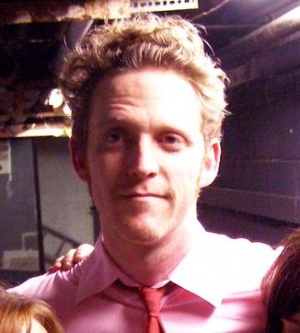 Chris Anderson is a friend of the band. He is notable for his roles in People Are Wrong! and the band Muckafurgason (with John Lee), whose third record The Pink Album was produced by John Flansburgh.

Chris has co-written the following songs with Flansburgh:

He appears in the videos for "Anaheim" and "Asbury Park," in both cases in the mysterious role of "The Guy." (He appears to portray the exact same character in both videos.) He also plays the Q in the video for "Q U" and appears as a bartender in "Rock Club". He also appeared in a television commercial advertising the album No!

Anderson played on Jonathan Coulton's album Artificial Heart alongside Marty Beller, and was part of music group The Last Car, which has opened for They Might Be Giants and in which Robin Goldwasser and Amy Miles also perform.