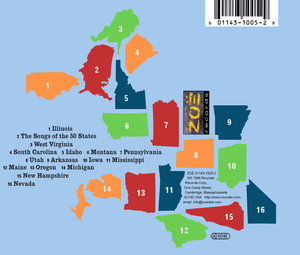 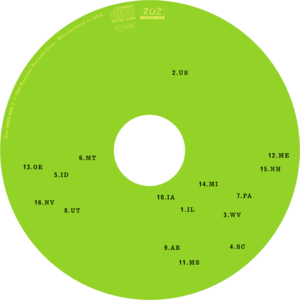 State Songs is John Linnell's first and only full-length solo album, released in 1999. It features sixteen songs, most of which are named after (but not actually about) U.S. states.

Linnell devised the concept and began writing some of these songs for 1988's Lincoln. [1] He played them solo at a show in his New York apartment Quiet Life in 1989, opening for the band the Maudlins. Future Statesman bassist Mark Lerner attended the show and later recalled, "He'd been engaged for many years in a project to write a song for every one of the fifty states." This is also where Lerner had his first date with his future wife Nancy Lynn Howell, who did vocals for some Mono Puff tracks. [2]

Five of the songs (in earlier versions) were released in June 1994 as part of the Hello CD Of The Month Club.

Publicity material: "John Linnell, one half of the conspicuous rock duo with John Flansburgh, They Might Be Giants, has created his first solo album. Find out why critics are already hailing State Songs as an album that's big as all outdoors and all over the map."

Linnell: "I decided to start writing songs with the name of the states as a way of avoiding having to come up with song titles. I suddenly had fifty song titles and I could write fifty songs based on that. This is always one of my problems with writing lyrics is I'm just so lazy I don't want to have to think up all the words and what it means. ... It's just a way to create more music without having to get bogged down in verbal ideas."

Linnell: "One other reason I was interested in writing state anthems is because I like the style they usually employ in state anthems. Sort of archaic and kind of square."

Q: "You call this sort of a 'Ringo Walk' project."
A: "That's a term we've really been beating to death recently. It refers to the part of the movie A Hard Days Night where Ringo is walking around by himself and they're playing 'This Boy'. It's this special Ringo moment in the movie where he realizes he doesn't need his friends and he just wants to walk around on his own. John and I realized that, you know, we all need those times. ... [H]e really liked this record."

Linnell: "I don't think that the songs are liable to be adopted as the state anthems of the actual states, sadly. I was thinking initially that that might be a nice thing, but thinking about it I think songs like 'Oregon is bad' are not likely to go down very well in Oregon."

Linnell played these songs on tour in 1999 and 2000 with a new band called The Statesmen, some of whom played on the album. In the live setting, they usually covered a few other songs with themes of U.S. states in order to flesh out the setlist.

A special limited-edition vinyl of the album was released in 2019 for Record Store Day Black Friday, and a digital "Expanded Edition" followed in 2021.

Digital-only bonus track released for download/streaming in 2021, previously only available on the vinyl Montana single.