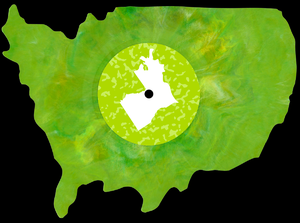 "Montana" was accompanied by the B-side "Louisiana", which was exclusive to this release. The record was die-cut, green vinyl in the shape of the continental US, pressed by Erika Records[1]. Due to the shape of the record not leaving much room for music, the original song choice for this single, "South Carolina" (which runs nearly 4 minutes) was deemed too long to fit and swapped out for "Montana."

Some automatic turntables have trouble playing the record due to the grooves being so far into the center that the tone-arm lifts before playing audio.