Who the F**k is Brian Doherty? 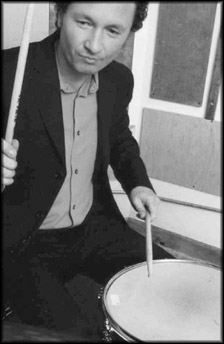 Not to be confused with Brian Dewan or Mike Doughty

Brian Doherty was TMBG's second live drummer (following Jonathan Feinberg) and first studio drummer, and played with the band from 1993 to 1996. He played on Why Does The Sun Shine?, Back To Skull, John Henry, Factory Showroom, and Severe Tire Damage. Doherty also appeared on John Linnell's State Songs.

When asked about leaving TMBG, Doherty has stated:

People ask me why I left They Might Be Giants. The short answer is that I was not a full partner in the business and I felt that I had gone as far as I could as an employee. More than playing music, I enjoyed Flans and Linnell as people. They are both funny as shit and incredibly interesting. It was my pleasure to work with them.

Brian worked on a biography titled Memoirs of a Rock Drummer[1]. The book was expected to include a behind-the-scenes look at his years with TMBG, but it was never released. A short excerpt of the book featuring a story about "Weird Al" Yankovic attending a 1994 They Might Be Giants concert was featured on Doherty's website briefly in October 2011, but was quickly removed.

In early 2020 he appeared on a few episodes of the fan-created TMBG podcasts Don't Let's Start and This Might Be A Podcast, discussing his time with the band. Later that year he began hosting his own podcast, Friends and Music with Brian Doherty; his first guest was Tony Maimone.