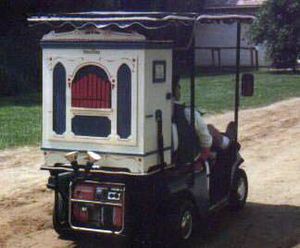 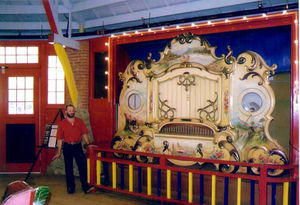 Bob Stuhmer ran the Wurlitzer band organ for John Linnell And The Statesmen. He is also credited on "Illinois" and "Iowa" from Linnell's State Songs album as providing "Wurlitzer 103 Band Organ paper roll cut by...", with mention that those tracks were recorded at his home.

What's perhaps a bit surprising is that all of that is apparently something of a sideline for Mr. Stuhmer. By profession, he's an illustrator and animator (see external link below). Nonetheless, this note from the archives of Mechanical Music Digest makes it clear that he has another avocation: He "arranges and sometimes punches by hand" the paper rolls for these classic instruments, and "most of the theme parks in the Northeast have some of his rolls on their [carousel] organs." (Mr. Stuhmer avows his enthusiasm for both amusement parks and carousels in a note at the bottom of this article that he wrote for a travel website.)

The "Utah" and "New Hampshire" tracks on State Songs feature the Wurlitzer 165 band organ at Glen Echo Park, Maryland, which appears to be a much larger instrument. A review of a 1999 performance mentioning Mr. Stuhmer, which makes mention of the organ used in the live performance as being smaller than expected, suggests that Mr. Stuhmer used his style 103 organ (or something similar) for all of the songs at that show that required it, though this is only speculation.