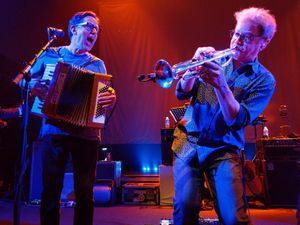 John Linnell and Curt Ramm in 2018

Curt Ramm is the touring trumpeter for They Might Be Giants and is based out of Newport, Rhode Island.

Originally appearing at shows as part of the Tricerachops Horns, which has joined TMBG live occasionally since 2007, Ramm became the permanent sixth member of TMBG's live band in 2018 and has been touring with them til June of 2022.

He also has played trumpet on studio They Might Be Giants albums since the late '00s, including tracks from Here Comes Science, Join Us, Glean, I Like Fun and BOOK.