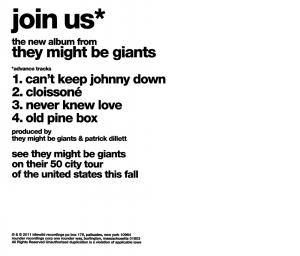 Back of the promo CD

Join Us (Four Advance Tracks) is a 4-track preview, commercially billed as a digital EP, and released through iTunes, Amazon, theymightbegiants.com, and the TMBG Instant Fan Club. It previewed songs that were later released on the band's fifteenth album Join Us. The EP also exists as a promotional CD.

Consumers who purchased the EP via iTunes at the price of $3.99 were able to complete the full album at a discounted price when Join Us was released in July.

The album's artwork and individual track art were designed by Paul Sahre.