Here Comes Science is a children's CD/DVD set from They Might Be Giants, and is the third in their line of educational albums, following 2005's Here Come The ABCs and 2008's Here Come The 123s. It is the band's fourteenth studio album and fourth full-length children's album. 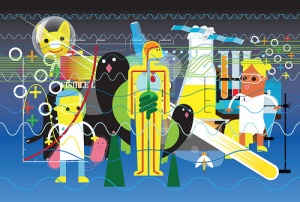 After releasing two successful childrens'-oriented albums for Disney, production on the band's next studio album began in late 2007. A short sample clip for a music video from the album—"How Many Planets?"—was posted in January 2008 to Colourmovie's website. Shortly thereafter, the band began hinting that the next children's album would be science-themed via interviews, but the actual title of the album was not confirmed until August of 2008.[1]

The band also hired Eric Siegel from The New York Hall of Science, a children's museum in Queens, as a scientific consultant. His main function was to ensure that all the material was accurate for this project because, as Flansburgh admitted, "frankly, I was a terrible science student in high school. My last memory of the periodic table was right before I lost consciousness." [2]

Here Comes Science is the third in the "Here Come..." line of albums created by the band. Flansburgh has stated that "Science" was the album that Disney Records originally wanted the band to record. However, they decided to approach the 123s and ABCs first, due to their more universal appeal. [3] Much of the album is intended for a slightly older audience than their previous children's albums. In an interview with Spinner.com, Flansburgh remarked "The science idea is interesting because it kind of bridges our family audience with our adult audience. We had a couple of songs in the past that touched on scientific themes, notably 'The Sun Is A Mass Of Incandescent Gas.' It was kind of familiar territory and it seemed like it fit in with the spirit of the band and there's a lot to be said." 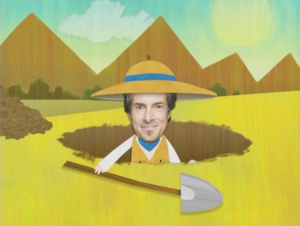 A screenshot of the video for I Am A Paleontologist.

Following in the same vein as the other "Here Come" albums, "Here Comes Science" was released as both a CD and an accompanying DVD. Several animators that have created videos for TMBG in the past, also contributed videos for this album, including Divya Srinivasan, Tiny Inventions, David Cowles, Hine Mizushima, Feel Good Anyway and several more.

Rather than using The Puppet Johns as hosts, the DVD features cartoon versions of John and John (animated by David Cowles and Liesje Kraai) interspersed between videos.

As was experimented with on prior TMBG albums (such as The Else), "Here Comes Science" was released digitally on iTunes and on CD/DVD through Amazon.com, prior to its full release. It was scheduled to be released on September 1st via both merchants, however the album was released on iTunes a day early. In addition, strong pre-sales of the album forced Amazon.com to move its release date back to September 8th, at the last moment. On September 22nd, the album was released into full distribution, and a new bonus track, Waves, was made available as an MP3 from Amazon. The album features packaging designed by Melissa Jun, including a timeline of major events in the history of science and artwork from many of the accompanying music videos.

Reception for the album was largely positive. Many reviewers have characterized the album as fun for both adults and children, even though it is technically a "kids album". As quoted on boingboing.net, "This is the album They Might Be Giants was put on Earth to record." [4]

Some songs on the album, specifically Science Is Real and My Brother The Ape, have been criticized for promoting science over religion. [5][6] In an interview with Wired, John Flansburgh commented on the song: "Although it wasn’t designed to create controversy, it’s still a big relief to me that the opening track, Science Is Real, didn’t raise any red flags with the label. The song freely acknowledges the Big Bang and evolution, and casually conflates angels with unicorns and elves–all of which might bug some anti-science, pro-angel folk."

A chart showing the performance of Here Comes Science on the Billboard Kids chart.

Somewhat surprisingly, even though it was a childrens album, it also landed on two CMJ charts: The Radio 200 and Triple A charts. It peaked at number 18 on The Radio 200, and spent six weeks on that chart.

In late 2010, the album was nominated for a 2010 Grammy for Best Musical Album for Children.[7] The band lost to Pete Seeger's album Tomorrow's Children.

In less than 2½ years after its release, the album was certified Gold by the RIAA, in the Video Longform format, on January 26, 2012[8]. To achieve certification in this category, the DVD has sold more than 50,000 copies.