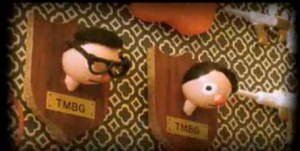 Hine (pronounced "hee-neh") Mizushima is a textile artist and designer. Hine formerly maintained a They Might Be Giants fan blog called "A Piece of They Might Be Giants". She is also the creator of wonderful fan art, videos and projects such as the "TMBG Puppets Shoot 'Ana Ng'" stop-motion video.

Hine contacted the band through their Myspace page, by sending them a link to her "Ana Ng" puppet video, which featured hand-made felt Johns re-enacting the regular "Ana Ng" video on a small (and mostly plastic) scale. Impressed by her fan art, the band later commissioned her to create the official videos for both "With The Dark" and "The Secret Life Of Six". In 2009, she created a video for the Here Comes Science version of "Why Does The Sun Shine?". All her music videos feature her own hand-stitched textile work and plush characters. Hine also designed a shirt, featuring an orange squid and the text "Operation TMBG" printed in Japanese, for TMBG. It was also available for purchase at TMBG's online shop.

Hine also collaborated with the band on the graphics for their app, which was released for iOS in January 2013, and Android in May. The app uses images of a felt cassette tape, which was constructed by Hine. That same year, she also created a music video for the track "Insect Hospital" from Nanobots.

In 2018, Hine directed the video for "Lake Monsters" from I Like Fun.