John Henry is They Might Be Giants' fifth studio album, released in 1994 on Elektra. 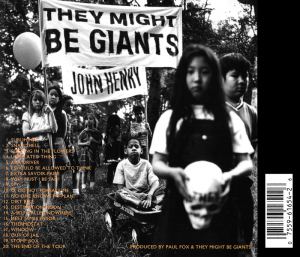 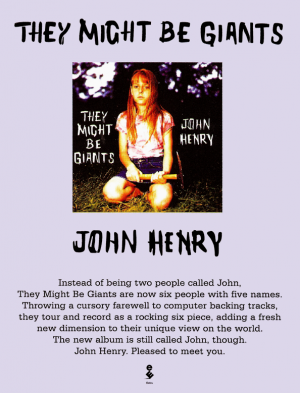 Feeling that John and John had taken the band as far as it could go with reel-to-reel tape recordings and drum machines, Susan Drew of the band's label Elektra persuaded them to recruit a live band for the second phase of their year long tour in support of Apollo 18. For their first live band, the Giants recruited Pere Ubu bassist Tony Maimone, Kurt Hoffman of The Ordinaires on keyboards and reeds and Jonathan Feinberg on drums.

John Henry would be the band's first studio album recorded with their touring band. The sound was quite different from previous albums, many of the tracks were guitar-heavy and live horns were used on several tracks, creating a harder-rocking feel and allowing them to better mold the moods of the songs. Drums on the album were handled by new band member Brian Doherty, Jon Feinberg having left after the end of Apollo 18 tour, and two tracks feature Maimone's replacement on bass, Joe Jackson Band veteran Graham Maby. Paul Fox co-produced the album with the band. Some longtime fans of the band became upset by the changes and even went so far as to stage boycotts of the band's live shows.

To generate excitement for the album, John Linnell created a HyperCard stack for Apple Macintosh that was released in May 1994 and distributed on alt.music.tmbg, the original They Might Be Giants website and Elektra's TMBG page. It contained previews described as "interpretive snippets in extremely crappy lo-fidelity" of the album's 20 songs, which consisted of short instrumental and vocal samples pitch-modulated and played in sequence to resemble melodies of the album tracks. A web recreation of the HyperCard stack can be played with here.

In an event repeated with TMBG's next album, Factory Showroom, a bootlegged demo tape of eight tracks from the album's studio sessions was leaked. These demos existed only in cassette form prior to the release of Podcast 27A in 2007, which included high-fidelity versions of seven of the tracks. Full-band studio demos were recorded with Pat Dillett for all of the songs on the album, with the exception of "Stomp Box". In 2012, all these demos were collected and released officially as John Henry Demos to the Instant Fan Club, followed later by a CD and vinyl release in 2018.

Sales and performance of the album were somewhat of a paradox. John Henry peaked at No. 64 on the Billboard 200, and was the band's highest placement on that chart until Join Us debuted at No. 32 in July 2011, though it only spent four weeks on the chart. At the time, this was the shortest span for which any They Might Be Giants album had charted, with the exception of Pink, which failed to chart.

"Snail Shell" had a successful run on the Billboard Hot Modern Rock Tracks chart, peaking at #19, and spending 8 weeks overall on the chart. In addition, "AKA Driver" was released as a promotional single, but did not chart.

"John Henry is a legendary black railroad worker from the middle of the nineteenth century. He figures in a number of American folk songs, including one simply called "John Henry." The story describes a competition between John Henry, the strongest human, and a new machine built to smash rocks. They compete to break through a mountain. The machine breaks down in the tunnel, while John Henry comes out the other side, only to die from exhaustion. Since this was the first album where we worked with a live band instead of a drum machine it seemed an apt title."

"What does the skull mean on "Back To Skull" and "John Henry"?

We generally prefer not to decide what things like that mean. The skull was chosen as an element on the cover art partly to offset the adorable cuteness of the kids. The effect of the whole thing seemed right, for reasons hard to put into words."

Half are friends' kids, and the other half are professional model kids we cast for the shoot.