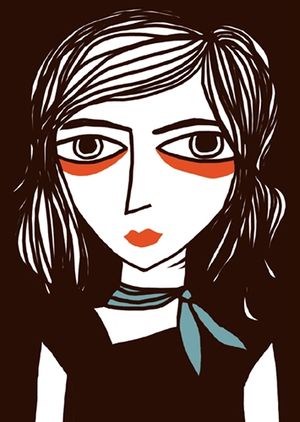 Divya Srinivasan is an acclaimed and multi-talented artist, animator and photographer who has been collaborating with They Might Be Giants on various projects since 2004. Her first music video for the band was for The Spine's "Damn Good Times", first featured on tmbg.com and then later included in 2005 on the Venue Songs DVD. She also animated the music video for "Los Angeles" on the Venue Songs DVD.

In 2005, Divya was a featured artist on the Here Come The ABCs DVD, for which she animated five videos: "Go For G!", "A To Z", "Letter/Not A Letter", "Alphabet Lost And Found", and "A To Z (Type B)". An illustration from the "High Five!" video that Divya animated is featured prominently on the cover artwork of the Here Come The 123s DVD/CD set.

Continuing her partnership with TMBG, in 2009, Divya created videos for "Roy G. Biv," "Speed And Velocity" and "The Bloodmobile" for their album Here Comes Science.